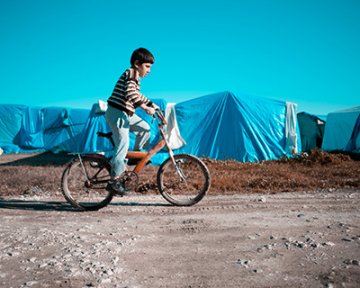 Divorce and polygamy are on the rise in Syria, the Associated Press reports, with hundreds of thousands of Syrian men having been killed, exiled or simply disappearing during the conflict.

Since the uprising began in 2011, 470,000 Syrian nationals lost their lives, due directly or indirectly to the crisis, according to the Syrian Centre for Policy Research. The death toll equates to a staggering 11.5% of the country’s total population and thousands more, "particularly male breadwinners", have been injured, arrested or kidnapped. Faced with grave financial hardship following the loss the familial income provider, the women left behind are increasingly forced to rely on remarriage as a means of economic survival. However, the conflict has resulted in a dearth of eligible unmarried men.

"There are more women than men", judge Mahmud al-Maarawi told the AFP, "the solution from a legal and religious point of view is polygamy." Official figures state that 30% of marriages registered in Damascus in 2015 were polygamous, up from a mere 5% in 2015.

Polygamy is permitted under the Syrian law of Personal Status, but is subject to a set of strict regulations pertaining to financial capacity and the consent of all parties. These are enforced by religious courts - sharia courts for Sunni and Shia Muslims, madhhabi courts for Druze, and ruhi courts for Christians and Jews. However, tribunals now reportedly bypassing these restrictions in order to ensure that women who have lost their husbands can receive financial protection from a new spouse.

It is not only widows turning to polygamy -divorce rates rose by 25% in Syria between 2010 and 2015. Sabah al-Halabi, a Damascus-based mother of five who wed a married man 24 years her senior, explained to the AFP that her first husband "abandoned" the family "after losing his job". The violence in Syria has had a catastrophic impact on the country’s economy, with unemployment at 52.9% by the end of 2015.

In addition to economic hardship putting strain on relationships, the dilemma of whether to seek asylum in a new country, or remain in a war-torn homeland can also cause marital discord. Mr Maarawi claims that, in his experience, disputes between couples often arise "when one wants to emigrate and the other is afraid of the journey or being far from their family".

The Associate Press attributes the proliferation of divorce and polygamy in Syria to the both the war itself and the effect of the conflict on day-to-day life. Not only are families forcibly separated by the violence, but the economic collapse and social fragmentation of the country can drastically exacerbate existing tensions within a marriage.

Christina Estrada faces having to sue her own daughter to get divorce award
This site uses cookies. Find out more. Continued use of this site is deemed as consent.   CLOSE ✖