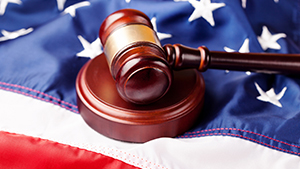 Vanessa Trump is suing her husband, the eldest son of US President Donald Trump, for divorce. She has filed for an uncontested divorce in a New York court, meaning that issues such as the distribution of the couple’s assets, or custody of their five children, will not be debated as part of the legal proceedings concerned with dissolving the marriage.

Vanessa Trump is an ex-model, who has made film and TV advertising appearances and once competed in the Miss USA competition. Donald Trump Jr co-runs the family business with his brother Eric Trump, whilst their father is busy facing up to the challenging role of President of the United States. Donald Jr played a prominent role in his father’s election campaign; following his involvement in arranging a meeting of campaign officials with Russian representatives, he has come under investigation for possible collusion with Russia during the 2016 US Presidential election.

The couple were married in 2005 and there have since been reports of marital tension, focusing particularly on Mr Trump Jr’s frequent overseas travel. It would be understandable if the results of his increasingly public profile have put a strain on the marriage - in February this year Vanessa Trump had to be taken to hospital after opening a letter addressed to her husband and sent to her mother’s rental apartment, which spilled out an anonymous white powder; tests later showed the powder was harmless.

Regarding the split, the couple issued a statement that was printed in the New York Post gossip column announcing the separation to the public, simply saying

"after 12 years of marriage, we have decided to go our separate ways. We ask for your privacy during this time."

Mr Trump Jr appears to have become more of a public figure since the couple married, whilst Vanessa Trump has become more private, swapping her party-going socialite lifestyle for that of a stay at home parent, who is regularly seen on the school run. The couple met at a fashion show in New York City in 2003 and were introduced by Donald Trump Sr. They made headlines in 2004 when they got engaged - Vanessa’s future husband proposed to her with a $100,000 ring gifted to him by a jewellers, in return for his proposal taking place in front of the retailer and being caught on camera.

Although the uncontested divorce proceedings in New York will not feature a battle for child custody or a financial settlement, resolution on both issues will presumably follow in due course. It is thought that for the time being Vanessa Trump is living at her husband’s Upper East Side apartment with their five children. Publications such as the Architectural Digest have begun speculating that Vanessa Trump is already capitalising on an anticipated sizeable financial settlement, owing to the fact that her mother, Bonnie Haydon, has recently purchased a $6.4 million apartment in New York. However, through a Trump organisation spokesperson, the couple have denied that the purchase has anything to do with the divorce, stating that Vanessa’s mother’s transaction was one she made privately.

With Donald Trump Jr’s net worth being reported at around $300 million, it might be reasonable to expect that Vanessa Trump would associate herself with a known powerhouse of a lawyer with a reputation for huge gains following divorce proceedings. Instead, the New York Times claims she has chosen David Feureisen, who is described as having a low media profile and a background in "civil, criminal and divorce cases" but is "not a boldface name".

New York State is an equitable distribution state, meaning that the pair’s assets ought to be divided in a way that the court feels is fair, taking into account each party’s contribution to the marriage, and what is necessary for each spouse to possess after the divorce.

In the matter of C (Children) [2018]: a remedy for child abduction by the other parent
This site uses cookies. Find out more. Continued use of this site is deemed as consent.   CLOSE ✖