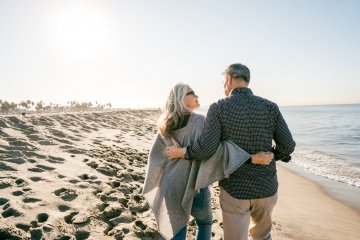 Thousands of older couples living together in the UK are opting out of marital tax breaks and state pension rights with soaring numbers choosing not to marry.

Last year’s ONS statistics show that cohabiting couple families are the fastest growing family type. An analysis by Royal London published this week drew attention to fact that the proportion of people over state pension age who were cohabiting tripled between 2002 and 2015.

The divorced or widowed pensioners choosing cohabitation over remarriage are not eligible for the many tax breaks and state pension advantages which apply only to married couples, including the new family home inheritance allowance that came in last month.

Married couples can transfer their personal allowance, switch assets to the lower-earning partner, double up on CGT exemptions to minimise their joint tax bill and if eligible inherit their partner’s final salary pensions.

Perhaps more significantly for much older couples, married couples can transfer assets to their partner without them being hit with inheritance tax. They can transfer any unused portion of their inheritance tax threshold to their spouse. This year saw a tax free allowance extended to family homes worth up to £1m, also transferable to spouses.

It is a well-known truism that married couples are wealthier, but for pensioners who may well have families from previous relationships, there may be a number of reasons why they are disinclined to tie the knot.

With increasing numbers of ’silver splitters’ divorcing in their retirement, and people living longer lives, this pattern is not set to change.

In the years to come we may well be seeing more formalised cohabitation or prenuptial agreements for couples who may have had their families and built up their assets, but want to commit to a new partner later in life.

Hopes dashed for Israel's "chained wives"
This site uses cookies. Find out more. Continued use of this site is deemed as consent.   CLOSE ✖