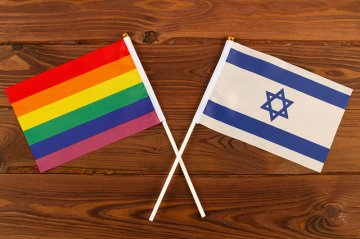 A transgender father of five has been granted permission to appeal a High Court decision which ruled out face-to-face contact with their ultra-Orthodox Jewish children.

The parents had raised the five children together in an ultra-orthodox community in northern Manchester until in June 2015 the father left home to live outside the community as a transgender woman. She has had no contact with the children since but applied for child contact in January the following year. Both the mother and eldest son, aged twelve, feared that contact would be damaging and sought to restrict it. In support of the father’s application, counsel cited a notable case from last year when a court ordered that it was “essential” for the children of a divorced ultra-orthodox Jewish couple to continue to see their father, even though the mother feared they would be ostracised as a result.

However after hearing the case in the High Court, Mr Justice Peter Jackson ruled in January 2017 that the children should have indirect contact with their father four times a year. He said he had “reached the unwelcome conclusion that the likelihood of the children and their mother being marginalised or excluded by the ultra’Cambria Math’,serif;">‐Orthodox community , is so real, and the consequences so great, that this one factor, despite its many disadvantages, must prevail over the many advantages of contact”.

The family had been based in the North Manchester Charedi Jewish community, an insular, ultra-orthodox group who live in strict adherence to Jewish law and distance themselves from modern secular culture. Both parents came from very large Charedi families themselves and were married for 14 years before the father left the family home.

In his judgment, Mr Justice Peter Jackson lamented the situation in which a loving parent had to be denied contact for the welfare of the children:

"I find this a very troubling case. These children are caught between two apparently incompatible ways of living, led by tiny minorities within society at large. Both minorities enjoy the protection of the law: on the one hand the right of religious freedom, and on the other the right to equal treatment. It is painful to find these vulnerable groups in conflict."

In English law the welfare of the children is the court’s paramount consideration but there is a presumption unless the contrary is shown, that a non-resident parent’s involvement in a child’s life will further the child’s welfare. A child will therefore be entitled to contact with both parents save in the most exceptional circumstances. Where the various rights and protections offered within English law and European human rights law conflict, case law shows that the rights of the children normally prevail.

Mr Justice Peter Jackson reflected in his judgement his both respect for LGBT rights and the English family court’s patience and firmness in seeking to secure a continuing relationship between parents and children.

"This outcome is not a failure to uphold transgender rights, still less a "win" for the community, but the upholding of the rights of the children to have the least harmful outcome in a situation not of their making."

The appeal hearing, estimated to last one day, will take place on 15 November 2017.

Divorce wave pulls up house prices in Hong Kong
This site uses cookies. Find out more. Continued use of this site is deemed as consent.   CLOSE ✖