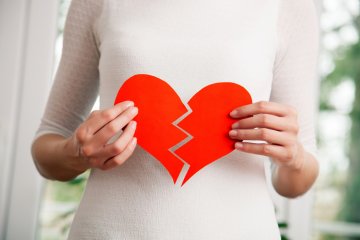 A 13-year study has found that divorce can not only break one’s heart, but could also increase the risk of dying from a heart attack. Researchers at Aston Medical School in Birmingham studied almost 1 million patients and found that divorced patients who suffered a cardiac arrest were 16% less likely to survive than their married counterparts. The study also found that individuals with high blood pressure are 9% more likely to die if they are divorced.

One important caveat before we delve in: this is just one of many studies from the last decade or so that has examined the relationship between divorce and heath. Not only have these led to many differing conclusions as to the physical impact (if any) of divorce, such studies generally note that it is the stress of divorce, rather than the event in and of itself that can have an adverse physiological impact. Much scaremongering can be accomplished by conflating correlation with causation and it’s important to consider how staying in an unhappy marriage can also be a significant cause of stress.

Back to the study at hand, scientists looked at 1 million adults with the three main risk factors for heart disease: high blood pressure, high cholesterol and type 2 diabetes. They then followed up with them 5 years later. Those with a spouse had greater survival rates than those who were single. However, those who were divorced were less likely to survive than either of the other two groups.

The new data was presented at the European Society of Cardiology congress in Barcelona. Dr Rahul Potluri, the study’s senior author, said:

“One of the questions we are asking is why do divorced patients do so much worse? And that’s where psycho-social factors come in - the acute stress of divorce in particular… What happens with divorce is that someone who may have been compliant with their medication while they were married is suddenly under a lot of stress as well as being on their own…They may find it difficult to look after themselves, they lose control of what’s going on. It’s a double hit.”

Experts explained that those with a loving partner were likely to be encouraged to look after themselves by keeping fit and taking their daily medication. Those who have gone through a divorce may not only lack that help and support, but are also having to cope with the stress of the breakdown of their marriage. They have suggested that doctors should ask patients what help and support will be available to them when they return home and should make sure that assistance is offered where it is needed.

Although this study was conducted on those who had already suffered a heart attack, researchers added that doctors should also be vigilant with divorcees and other single patients who had not yet suffered a cardiac arrest, but were considered to be at significant risk of suffering one. Dr Paul Carter, lead author, said:

“Marriage, and having a spouse at home, is likely to offer emotional and physical support on a number of levels ranging from encouraging patients to live healthier lifestyles, helping them to cope with the condition and helping them to comply to their medical treatments. Our findings suggest that marriage is one way that patients can receive support to successfully control their risk factors for heart disease, and ultimately survive with them. The nature of a relationship is important and there is a lot of evidence that stress and stressful life events, such as divorce, are linked to heart disease.”

"Divorce is commonly believed to be one the biggest causes of stress and we know that stress is bad for heart health. Although this study doesn’t prove a causal link, it shows the benefits of a strong support network on our long-term health and well-being.”

Both comments show that it is the stress of divorce, rather than divorce itself that appears to increase the risk of heart disease. While divorce is undeniably a life-altering event, in some circumstances it is certainly possible to have an amicable split and thus mitigate some of stress associated with divorce, though certainly the introduction of no-fault divorce would make this easier. Again, it’s also important to note that staying in an unhappy marriage can in itself lead to significant stress.

Furthermore, these findings must be evaluated within the context of previous studies. A major UK study published in 2015, for example, found that divorce presents no discernible long-term health problems. Interestingly, this study found that single people who had no partner at all were most at risk of cardiovascular disease or respiratory problems.

Therefore, studies looking at the correlation between marriage status and heart disease or other health issues must be analysed with caution. While experts have shown there is a correlation between stress and its impact on cardiovascular health, the sample size and conditions of control of a particular study must be considered, as well should the notion that stress can be caused by multiple factors in an individual’s life.

Recognising foreign adoptions: W v The Secretary of State for the Home Department
This site uses cookies. Find out more. Continued use of this site is deemed as consent.   CLOSE ✖