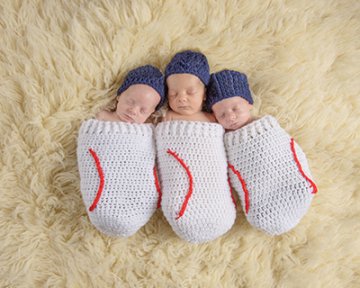 A gay couple from New Zealand have been struggling to bring home their ‘triplings’ from Mexico. Triplings are babies using the same sperm and egg donors, but born from different surrogates.

The couple, David and Nicky Beard, found themselves “stranded” in Mexico after one of the babies developed medical complications costing NZ$118,132 (£56,000).

A friend of theirs started a crowd-funding page that proclaimed, “The problem now is that they are stranded in this third-world country with little or no finances left and another month or so of bureaucracy to get through,” reported The Guardian.

Supposedly, the couple is unable to leave Mexico because they cannot afford DNA testing to prove parentage and secure passports for the children. The crowd-funding page has raised over $25,000.

The Beards wrote, “We have spent every cent we have left to bring these three beautiful Kiwi babies into the world. We now need to get ourselves and the three babies out of this dangerous country and back to the safety of New Zealand.”

International surrogacy for homosexual couples was recently banned in Mexico, fitting into a worldwide pattern of cross-border surrogacy restrictions. The triplings’ mothers were pregnant before the law was passed.

New Zealand’s ministry of foreign affairs and trade offered advice, but said there was nothing they could do in an international surrogacy case.

However, the triplings case has recently drawn anger and criticism for allegedly exaggerating the state of affairs. The Beards’ lawyer, León Altamirano, said, “There are no problems.”

Altamirano, who specializes in surrogacy law, said, “They need to sign some affidavits and some consents for the adoption … but they are not stuck here … They already have the birth certificates,” reported The Guardian.

Jorge, another surrogacy father who met the Beards said that they were enjoying their time in Mexico but were “telling a totally different story” to the general public.

“They said they had nothing but good things to say about the people in Mexico,” Jorge said. “We were staying at the same hotel and said wonderful things about the hotel and that everywhere they went, people were kind and helpful.”

The Beards have referred to Mexico as “dangerous” and a “hell hole,” saying the clinic where their babies were born was infested with cockroaches.

Alice Torres Meza, a coordinator for Surrogacy Cancun Mexico, called the accusations of poor hygiene “ludicrous,” saying she has had hundreds of clients without any complaints.

“I’m pretty sure what he was trying to do was get the sympathy of the readers,” Altamirano said. “I don’t know what he is trying to do, but the truth isn’t all there.”

David Beard posted on Facebook on March 11, “Uncle Johnny we need you and your double barrel shot gun – not just for the crocs, for some of the Mexicans too.”

Same-sex adoption now legal across the United States
This site uses cookies. Find out more. Continued use of this site is deemed as consent.   CLOSE ✖