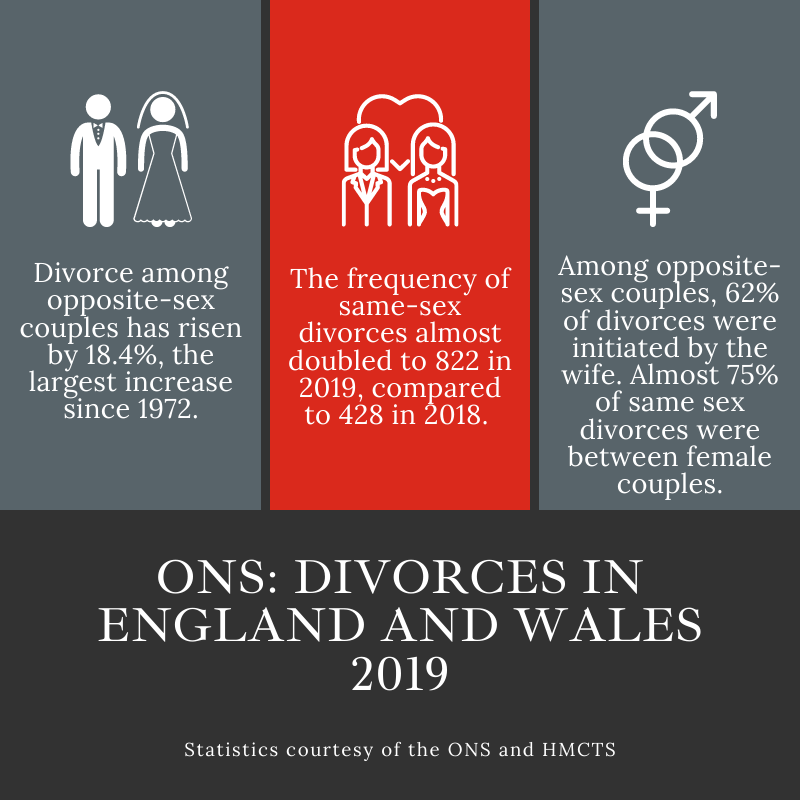 From the micro the macro, there are countless reasons why a marriage might break down. When it comes to divorce petitions however, the complexities of life are distilled into five grounds for divorce: adultery, unreasonable behaviour, desertion, separation for a period of two years or separation for a period of five years (in this instance, your spouse does not need to agree to the divorce).

There has not always been such synergy between sexes. While wives have been predominantly naming unreasonable behaviour, formerly known as “cruelty”, as the cause for opposite-sex divorce since the 1970s, this has only been true for husbands since 2006. In the 1980s and 1990s, adultery was the main grounds given by husbands. This changed between 1999 and 2005, when adultery was replaced by separation for a period of two years.

The previous disparity between the reasons given for divorce is also reflected in the frequency of petitions submitted: wives have consistently petitioned the majority of opposite-sex divorces since 1949.

These trends are mirrored in the data for same-sex divorces. Again, unreasonable behaviour is the most common grounds for divorce, with 65% of couples divorcing for this reason. A gendered difference is also evident in the frequency of divorce petitions, with female couples making up 72% of all same-sex divorces.

These trends may not persist for much longer. With legislation introducing no-fault divorce currently making its way through the legislature, many couples will no longer to need their support their petitions with one of the five facts, a move designed to make the divorce process more amicable.

With couples soon able to end their relationship without having to allege fault, the complexity of relationships will no longer need to be condensed into a choice of five. Instead, the law will recognise the simple fact that sometimes relationships just fade away.

The pandemic has changed lawyers’ perception of AI
This site uses cookies. Find out more. Continued use of this site is deemed as consent.   CLOSE ✖