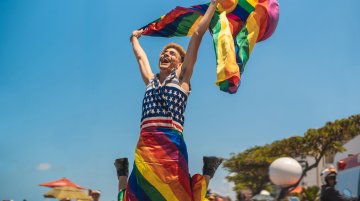 A US woman, whose fight to reclaim over $363,000 in estate taxes struck down the Defense of Marriage Act in the Supreme Court and paved the way for equal marriage rights, has passed away at the age of 88.

Ms Edith ’Edie’ Windsor, was a technology manager with a decades-long history of LGBT rights activism. From the early 1970s to the present day, Ms Windsor participated in numerous LGBT marches alongside her long-term partner, psychologist Thea Spyer, and volunteered for organisations such as the Gay & Lesbian Advocates & Defenders (as it was then), and the LGBT Community Centre.

After an engagement that lasted 26 years, Ms Spyer and Ms Windsor entered into a domestic partnership in New York in 1993. In 2007 doctors told Ms Spyer, who suffered from multiple sclerosis and aortic stenosis, that she had under a year left to live. With same-sex marriage not yet legalised in their home state, the couple married in Canada that same year, though they continued to live in New York City.

Ms Spyer died in 2009 due to complications arising from her heart condition. As she left her entire estate to Ms Windsor, the widow was ordered to pay $363,053 in federal estate tax. Under US federal law, a person can leave their surviving spouse property of unlimited value without incurring estate tax. While the couple’s marriage was recognised as legally valid by the State of New York, under the Defense of Marriage Act (DOMA), same-sex partners were excluded from the definition of spouse. Section 3 of DOMA provides that:

In determining the meaning of any Act of Congress, or of any ruling, regulation, or interpretation of the various administrative bureaus and agencies of the United States, the word ‘marriage’ means only a legal union between one man and one woman as husband and wife, and the word ‘spouse’ refers only to a person of the opposite sex who is a husband or a wife.” 1 U. S. C. §7.

This definitional provision meant that Ms Windsor did not qualify for spousal exemption. She paid the tax but sought a refund from the Internal Revenue Service. After the refund was denied, Ms Windsor filed suit in the United States District Court for

the Southern District of New York to "challenge the constitutionality of this provision".

The Fifth Amendment to the US Constitution guarantees the "equal liberty of persons", and the court was tasked with determining whether the DOMA violated this protection. While Ms Windsor’s suit was pending, then-President Barack Obama instructed the Department of Justice not to defend Section 3 of the DOMA in her case. On behalf of the President, the Attorney General informed Congress of the President’s conclusion that “given a number of factors, including a documented history of discrimination, classifications based on sexual orientation should be subject to a heightened standard of scrutiny.”

Though the District Court allowed the House of Representatives’ Bipartisan Legal Advisory Group (BLAG) to intervene in litigation to defend the constitutionality of Section 3 in this case as an interested party, the District Court nevertheless ruled in favour of Ms Windsor. In 2012, the court held the Section 3 was unconstitutional and ordered the Treasury to refund the tax amount in full, plus interest. The U.S. Court of Appeals for the Second Circuit upheld this ruling in a 2-1 decision the same year, applying heightened scrutiny to classifications based on sexual orientation, as both the Department and Windsor had urged".

"DOMA’s principal effect is to identify a subset of state-sanctioned marriages and make them unequal. The principal purpose is to impose inequality, not for other reasons like governmental efficiency. Responsibilities, as well as rights, enhance the dignity and integrity of the person. And DOMA contrives to deprive some couples married under the laws of their State, but not other couples, of both rights and responsibilities. By creating two contradictory marriage regimes within the same State, DOMA forces same-sex couples to live as married for the purpose of state law but unmarried for the purpose of federal law, thus diminishing the stability and predictability of basic personal relations the State has found it proper to acknowledge and protect."

"The federal statute is invalid, for no legitimate purpose overcomes the purpose and effect to disparage and to injure those whom the State, by its marriage laws, sought to protect in personhood and dignity. By seeking to displace this protection and treating those persons as living in marriages less respected than others, the federal statute is in violation of the Fifth Amendment."

Following her death earlier this week, Barack Obama paid tribute to Ms Windsor, praising the "stubborn willingness of quiet heroes to speak out for what is right".

"The day that the Supreme Court issued its 2013 ruling in United States v. Windsor was a great day for Edie, and a great day for America – a victory for human decency, equality, freedom, and justice."

Ms Windsor has been widely praised for paving the way for the nationwide legalisation of same-sex marriage in the United States. As The Guardian notes, following Ms Windsor%27s victory, "in quick succession, more than a dozen federal courts cited Windsor’s victory to strike down bans on same-sex marriage." The death knell for marriage inequality finally came in 2015, with the US Supreme Court case of Obergefell v Hodges in 2015.

A brief history of wardship
This site uses cookies. Find out more. Continued use of this site is deemed as consent.   CLOSE ✖