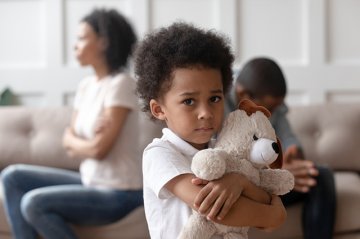 Many parents worry constantly about the condition of their marriage for the sake of their children’s welfare. They will endure hardship and suffering and all manner of emotional torment for decades, all to protect the illusion of the perfect marriage and the idyllic family unit and thus shelter their beloved children in ignorance.

While this is in many ways a stoical and admirable pursuit in its intention, I would argue that it is also, perhaps, somewhat misconceived. Children really are infinitely more robust than many would initially assume. All one has to do is watch how rapidly they recuperate from tumbling down stairs or hurling themselves off climbing frames or burning each other with matches – I had a charming childhood by the way, thank you for asking – to discern that they really are miniature human juggernauts, formidable in their regenerative powers and their resilience. They are indeed courageous little creatures.

According to numerous studies (some up to 25 years in progress) children of divorce ultimately end up just as psychologically healthy and well-calibrated as the average child. Some prominent child psychologists even claim to have observed (although academic opinions obviously vary on a subject with so many micro-variables and such an unpredictable human element) that certain positive characteristics appear to be accentuated in children of divorce, these including a greater sense of independence, a slightly more sensitive and empathetic disposition, and a more sophisticated perception of each parent’s value as an individual, rather than as simply one half of a composite parental machine.

It’s not as if, because Mum and Dad didn’t get along, the formerly mild-mannered Kevin will now take up smoking at the grand age of 6, grow a mullet, and become a convicted serial killer. No, children obviously won’t initially be delighted at the prospect of their parents’ separation, but of course they become saddened by all sorts of things, such as the moment Bambi’s mother died or the day they lost their pink balloon (actually, come to think of it, that one still hurts a little), and in reality they do bounce back faster, I would hazard, than even their own parents.

Consider this scenario from a pragmatic perspective and conclude for yourself whether or not it is ideal: your hypothetical child (let’s call him Barney, shall we?) grows up in a passive-aggressive and emotionally sterile domestic atmosphere, thickly laced with generous helpings of bitterness and cold resentment, in which Mum and Dad rarely, barely talk to each other. Poisonous and explosive arguments ruin every family occasion, the parents act with either cruelty or indifference in their dealings with one another, the children are subtly manipulated to take sides in this hideous game of distorted family politics, and little impressionable Barney, who constantly observes and emulates his parents, learns that this is simply how normal relationships are supposed to be, because what other material does he have to refer to? The majority of those reading this (unless you have a lump of cold flint where your heart ought to be) would choose not to inflict such a miserable development on their child, because then years from now some hugely overpaid psychotherapist will discover that Barney’s psychological condition looks like Dresden. I believe that while marriage ought certainly to be nurtured and defended where possible, there is no use mercilessly flogging a dead horse and then expecting the same wretched horse to raise a happy, healthy child.

It would be far better, in my own humble opinion, to separate as dignifiedly as possible and raise the child apart. The love for the child would of course endure (in fact, if anything, the child would be even more showered with affection as a form of compensation), but would be permitted their own independent happiness and their own opportunities for free self-expression, which is always far better in the grand scheme of things for the child’s wellbeing and impression of what constitutes a healthy and balanced family dynamic. However, it is, naturally, important to remember to reassure and comfort one’s children in this situation, to explain everything to them with sensitivity and candour and never to disregard their own feelings. It will always be difficult for them at first, but everything heals in time – really, it does, people are so beautifully forgetful – and children really are incredibly strong (I have a 9 year old sister who’s just discovered an insatiable passion for punching things, so I write with the haunted voice of experience) and astonishingly adaptable in their own small and surprising way. Eventually they recognise the practical benefits of having two happy and loving parents who rarely argue and who provide two sets of holidays and two sets of presents for birthdays and Christmases – I certainly did and still do now, at the ripe old age of 19, a perfectly cheerful childhood behind me.

Vardags raise over £11,000 for Smart Works
This site uses cookies. Find out more. Continued use of this site is deemed as consent.   CLOSE ✖