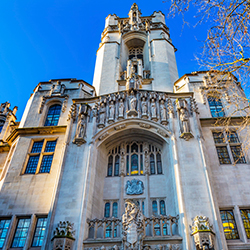 The Supreme Court has unanimously allowed an appeal by Ms Denise Brewster. The decision has been applauded as a positive step forward for cohabitating partners, as the effect of the judgment awarded a survivors’ pension scheme to an unmarried cohabitee. The decision brings the Northern Ireland public pension schemes in line with England, Wales and Scotland.

Upon Lenny’s death, Denise expected to receive a survivor’s pension, having been under the impression that Lenny had provided his nomination form to NILGOSC. NILGOSC stated that they did not receive the form and refused to pay her a survivor’s pension.

Ms Brewster appealed NILGOSC’s decision on the basis that the absolute requirement of a nomination form imposed on cohabitees as a condition of eligibility of the survivor’s pension constituted unlawful discrimination contrary to Article 14 of the European Convention on Human Rights and Fundamental Freedoms (ECHR), together with Article 1 of the First Protocol (A1P1) of the ECHR.

On 9 November 2012, Treacy J held that the nomination requirement was “an instrument of disentitlement” in relation to unmarried partners. Treacy J made the point that there was not a reasonable relationship of proportionality between the means employed and the aim sought to be achieved. It was therefore ordered that the requirement of nomination of a cohabiting partner in the 2009 scheme was not compatible with article 14 ECHR. NILGOSC’s decision not to award Denise a survivor’s pension.

NILGOSC and the Department of the Environment for Northern Ireland (DENI) successfully appealed to the Court of Appeal in Northern Ireland. The Court of Appeal held that the nomination requirement was not unjustified or disproportionate (Higgins LJ) and Coghlin LJ also concluded that the requirement had not been shown to be manifestly without reasonable justification.

Ms Brewster appealed and took her case to the Supreme Court.

In the interim period between appeals, the Local Government Pension Scheme in England and Wales was revised with effect from 1 April 2014 for claims arising after that date. The revisions included the removal of the opt-in requirement for unmarried couples. The same change was then made to the Scottish scheme by the Local Government Pension Scheme (Scotland) Regulations 2014. Ms Brewster made an application to the Court of Appeal to rehear her appeal but this was opposed by DENI and ultimately refused by the court.

The Supreme Court unanimously allowed Ms Brewster’s appeal and declared that the requirement for unmarried couples to complete a nomination form should be disapplied. Ms Brewster was therefore awarded a survivors’ pension.

The 2009 regulations were made on 25 February 2009 and the new Pension Scheme came into effect on 1 April 2009. The 2009 regulations provided for survivors’ pensions in circumstances where a member died and left a surviving spouse or nominated cohabiting partner or civil partner, provided they had been nominated and been living together for at least two years including the day on which the nomination declaration was signed and were financially dependent. The nomination form would therefore have no effect in circumstances where the two year condition had not been met.

Proportionality and consideration of the need for the nomination process

The court took the view that the essential question was whether imposing a nomination requirement amounted to a difference of treatment between married and unmarried couples. Married couples did not need to complete a nomination form.

The court stated that while they could understand that the procedural requirements were designed to establish that a genuine and subsisting relationship existed had been included in the regulations, the requirement for a nomination form did not explain why a nomination was required, as ‘it added nothing to the evidential hurdle which a surviving unmarried partner of a scheme member had to face’.

The court further stated that if ‘nomination was not required of a married survivor of a scheme member and if the overall aim of the amended regulations was to place a surviving cohabitant who was in a stable, long term relationship with the deceased scheme member on an equal footing with a surviving spouse or civil partner, the need for the nomination procedure for cohabitants was difficult to find.’

In considering whether the nomination requirement was in line with the appellant’s entitlement to equal treatment and complied with their obligations under ECHR and the Human Rights Act 1998, the court had to look at whether there was an objective justification for denying Ms Brewster her rights under the ECHR. The test to be applied in determining whether the nomination requirement in the 2009 Regulations was justified and proportionate was that of “manifestly without reasonable foundation”. The court considered that the purpose of the 2009 regulations was to provide cohabitees with rights to a survivors’ pension and that cohabitation in itself was a matter of choice, rather than an immutable characteristic. Socio-economic factors had not been at the forefront of the decision-making process.

Lord Kerr concluded that there was no rational connection between the objective and the imposition of the nomination requirement.

Although this decision has been applauded as a step in the right direction for cohabitees, it is important to note that the decision addresses one very specific point of law in terms of survivors’ pensions. Other public sector schemes will need to ensure their pension rules comply with the decision.

Chris Hall gives talk on succession planning at Probus event
This site uses cookies. Find out more. Continued use of this site is deemed as consent.   CLOSE ✖