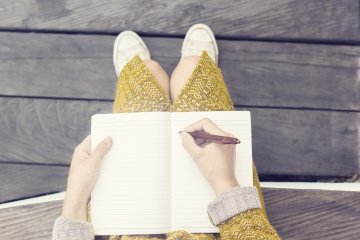 Can keeping a diary help mend a broken heart? Quite possibly, according to a study published this week in Psychosomatic Medicine: Journal of Biobehavioral Medicine.

As its title suggests, ’The Impact of Narrative Expressive Writing on Heart Rate, Heart Rate Variability, and Blood Pressure Following Marital Separation’ is concerned with the physical manifestations of heartache.

Conducted by psychology doctoral student Kyle J. Bourassa and colleagues at the University of Arizona, the study suggests that ’narrative expressive writing’ could improve cardiovascular health by mitigating divorce-related stress.

Research into the relationship between divorce and health has produced a mixed bag of results. In 2015, research by Duke University in North Carolina identified a correlation between divorce and cardiovascular health problems. Yet a 2005 study by researchers at Pennsylvania State University discovered that unhappily married people also “have lower levels of life satisfaction, self-esteem and overall health than individuals who divorce and remain unmarried”.

While the long-term impact of divorce on one’s health is uncertain, it’s undeniable that stress can have an adverse effect on the body. Divorce is often cited as a leading cause of stress, alongside bereavement, job loss and other significant life changes. Of course, that doesn’t necessarily mean that divorce is itself inherently bad but rather that the process of divorce—often costly, protracted and, particularly in jurisdictions without no-fault divorce, sometimes acrimonious—is taxing on body and mind.

According to material from the study published in ScienceDaily, while divorce has been "linked to increased risk for poor long-term physical and mental health...few studies have evaluated interventions to lessen the health impact of divorce."

This was the aim of the University of Arizona study, which took a group of 109 adults (70 women and 39 men) who had recently gone through marital separation as subjects. The participants were assigned at random to one of three different types of writing task, which were undertaken three times over a period of several days.

One group was given an "emotionally neutral" writing task. Another was tasked with "traditional expressive writing... with instructions to write freely about their "strongest and deepest emotions." The last group "performed a narrative expressive writing task, in which they created a ’coherent and organized narrative’ of their separation experience -- culminating in describing an end of their ’divorce story.’"

Previous research conducted by principle investigator Dr David Sbarra found that traditional expressive writing tasks, without the narrative element, increased emotional distress, particular among subjects who exhibited "a high degree of psychological rumination", or the persistent dwelling on one’s own mood. Though the more recent study did not measure the emotional effect of the writing tasks, when the divorce narrative was added there was no increase in physical stress for those with a high level of rumination.

"The effects of narrative writing on these health-relevant biomarkers is independent of adults’ self-reported emotional responses about their separation. Creating narrative may be good for the heart, so to speak, but this does not mean there a corresponding improvement in psychological wellbeing."

Nevertheless, he deemed the study’s outcome a "pretty striking result for just 60 minutes of writing over three days." Of course, the study only looked at relatively short-term cardiovascular responses, rather than long-term health effects. Further research may needed, but it is certainly encouraging, in the midst of scaremongering articles on divorce playing havoc on one’s health, to see attention given to alleviating trauma arising from the process of divorce.

All-male panel in Maryland fails to end policy that gives rapists parental rights
This site uses cookies. Find out more. Continued use of this site is deemed as consent.   CLOSE ✖