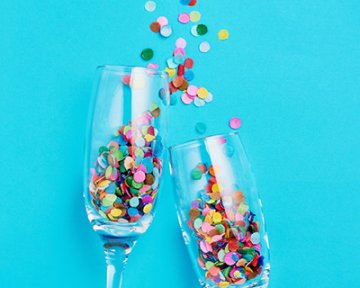 The divorce is finalized, the ink is drying, and the boxes are packed. What to do next – a quiet weekend away with friends to take your mind off it? An afternoon sifting through photographs in the attic? Far from it – more and more couples are now ‘celebrating’ with a divorce party.

Now the tabloids have been enjoying a story of a girlfriend who baked her boyfriend a cake to celebrate his divorce – and presented it to him at his Star Wars themed divorce party. You can see the results here: a rather artistic – if garish cake – featuring a picture of Yoda with the caption “May divorce be with you”.

Back in 2010, Debenhams released a ‘divorce list’ – not unlike the more traditional wedding gift list – cataloguing items to buy the new singleton for Christmas. Perhaps this marked the beginning of change for how we ‘celebrate’ divorce – and it has snowballed.

Websites such as PartyPacks.co.uk offer a range of supplies for the perfect celebration to mark the end of a marriage or civil union, including themed plates, napkins, and even a ‘just divorced’ black sash in mockery of the princess pink sashes adorning many hen parties.

The Great Northern Firework Company offers a divorce-package fireworks display, and WeddingRingCoffin.com does basically what it says on the tin – a practical way to bury the hardware left over from a dead marriage. But whilst some could see celebrating the end of a marriage as bizarre, it marks a change of attitude to what was, until recently, almost a taboo subject.

Some divorce parties are occasions for one half of the couple to declare their independence or let their hair down after what can be a stressful and emotional time, as an announcement of newfound singledom. The banners and balloons mentioned above are often used as a tongue-in-cheek way of parodying their wedding and using humour to cope with a major life change – think of Shanna Moakler’s now-infamous Las Vegas divorce party, complete with a dead groom cake-topper.

But for others, a divorce party is a chance to close a previous chapter in their lives, and mark their moving on.

Often seen as the final frontier to the wedding industry complex, this dual party usually involves a toast that emphasizes the couple beginning new chapters in their lives. The tone in this type of divorce party is often more serious, and aimed at healing rather than one-upmanship. The idea is to appreciate the good times, celebrate what was shared, and acknowledge support from invited friends and family.

Richard O’Malley, a New York event planner who organizes lavish divorce parties that can cost a staggering $25,000, is quoted in the Associated Press as naming them “freedom fests, as you aren’t celebrating the end of the marriage but the freedom you have chosen in your life”.

Although they aren’t for everyone, and many feel uncomfortable with the idea of throwing a party to mark a divorce, one major positive side effect of this advent of celebration is to help alleviate the stigma surrounding the end of marriage.

The sociologist Laura Arosio argues that the breakdown of marriage via legal separation and divorce is now beginning in contemporary Western societies to be regarded as an event of transition in the life course of individuals, and therefore does not have to be seen as ‘reductive’ or as a result of a ‘failure’. The rise of the divorce party and the wider divorce industry, then, should perhaps be seen not as something that demeans the process, but rather something that celebrates in. Cake, anyone?

Saudi Billionaire argues 'diplomatic immunity' in divorce
This site uses cookies. Find out more. Continued use of this site is deemed as consent.   CLOSE ✖