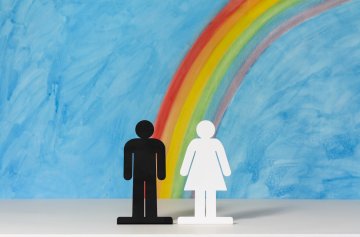 Charles Keiden and Rebecca Steinfeld are a couple who have been together for seven years. Although they have two children and are committed to each other, they do not wish to get married. They want to commit to each other in a way that they believe "captures the essence of [their] relationship and [their] values."

For them, this is a civil partnership; a more modern institution than marriage, it can come with the commitment, the legal protections and rights of marriage but without the patriarchal history.

The catch is that the United Kingdom government doesn’t currently allow heterosexual couples to enter civil partnerships. Charles and Rebecca are determined to change this, first launching a legal fight against the government four years ago. There is "nothing wrong" with marriage, they say, "but we see each other as partners - not as husband and wife." They cannot avoid being defined as husband and wife in the eyes of the law, but a same sex couple can choose to enter either a marriage or a civil partnership, where they would call each other "partners." The couple argues this means they are being discriminated against on the grounds of sexual orientation. Recently, the Court of Appeal rejected their claim, although it accepted that there was a potential breach of human rights.

"It was actually a very narrow loss," Rebecca asserts. "The three judges agree with our argument that just getting married is not sufficient, and they have a very short time now in which to act to open civil partnerships to all." Charles and Rebecca are determined to take advantage of this window. They have launched a crowdfunding campaign on gofundme.com for funds to continue fighting their battle for the right for same-sex civil partnerships, which they are now taking to the Supreme Court next month. So far, they hav raised £37,000 of their £45,000 goal.

Their backer since the beginning of their fight, the Equal Civil Partnerships campaign, is continuing to help. It is appealing for funds on Charles and Rebecca’s behalf on the crowdjustice.com website with a target of £7,000. Explaining why the funds are so crucial, the Equal Civil Partnerships campaign said, "The funding will be specifically to cover the costs of providing the bundles for the Supreme Court which need to be both detailed and of the highest quality. With five Supreme Court judges and three QCs involved, eight very detailed bundles need to be produced."

The Equal Civil Partnerships campaign committee answered questions about the cause for Vardags a few weeks ago. The campaign has been popular - it has drawn cross-party support from MPs and more than 126,000 people have signed their online petition. A successful result for the campaign could help the more than 3 million cohabiting couples in the United Kingdom. As they are not married, they currently have almost no legal protection within their relationship. The hope is that the government will now choose to introduce civil partnerships for mixed-sex couples without the need for further litigation. If it doesn’t, Charles and Rebecca have said, they will continue to fight - no matter how much it costs. Their crowdfunding efforts so far have been successful but they have still been forced to spend £7,000 of their own money. If another appeal is necessary, it will cost at least £25,000. They plead, "It’s an extremely onerous amount on a young couple with a child, so we hope that if it comes to an appeal, people who support us will dig deep."

Upcoming amendments to Family Procedure Rules
This site uses cookies. Find out more. Continued use of this site is deemed as consent.   CLOSE ✖