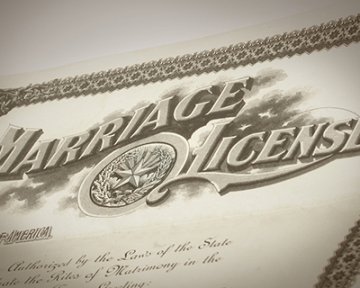 The Alabama Senate voted on Tuesday for a bill that will end the need for state-issued marriage licences in favour of a simpler process where couples file a form recording that their marriage has taken place.

Originally put forward in 2015 by Representative Jim Hill, the bill was voted by the Senate, but was not supported by the State’s House of Representatives. This week saw the bill make its way through the Senate for a second time, and is due to be considered by the House Judiciary Committee next Wednesday.

The bill would amend sections of the Code of Alabama 1975, and would:

The original purpose of the bill was to streamline the current marriage system and lessen the involvement of the State in the process, to enable couples to get married more easily. However, since the U.S. Supreme Court ruling in Obergefell v Hodges last year, Alabama voted to legalise gay marriage in the State, and some probate judges stopped issuing marriage licences to couples (regardless of sexuality) in order to avoid granting them to same-sex couples. Therefore, in addition to its original purpose the bill would end this controversy, in line with the State’s position on marriage; ensuring people could marry whomever they choose.

The current process requires couples to apply for a marriage license from their probate court. Once the couple’s ages and identity are verified, and further personal information is registered, court officials will grant a licence. The new method would require less input from court officials, but has led to questions concerning how information and identity would be verified.

There has been strong opposition to the bill, including Representative Patricia Todd (the only openly gay legislator in Alabama) arguing that it is unnecessary, as probate judges should simply be issuing marriage licences in accordance with their jobs.

“On the effective date of this act and thereafter, the only requirement for a marriage in this state shall be for parties who are otherwise legally authorized to be married to enter into a… document required to be executed by the parties.”

This form would contain certain information to ascertain the identity of the parties. An affidavit would be submitted to the probate court stating that each individual is not currently married, is of legal age, and is voluntarily entering into the marriage. Further questions would include ascertaining that the couple are not related by blood or adoption, and that they are competent enough to marry.

The proposed new system would similarly not influence other aspects of Family Law in Alabama: “shall not affect any other legal aspects of marriage in this State, including, but not limited to, divorce, spousal support, child custody, or child support,” strictly only affecting the efficiency to which couples can marry. Probate judges would simply be used to record the contracts of marriage, so that couples will be recognised, as legally married, by various government departments and institutions.

If the bill is passed into law, couples would no longer have to apply to the State for marriage-licenses and have to wait while a judge of probate reviews their application and permits them to marry. The State would be almost entirely removed from the process of marriage, and couples would be able to marry first, and legally record it later. It will be interesting to see how the bill fares for a second time in Alabama’s House of Representatives.

For the next update on this bill, click here

Ayesha Vardag wins Outstanding Achievement in Law Award
This site uses cookies. Find out more. Continued use of this site is deemed as consent.   CLOSE ✖