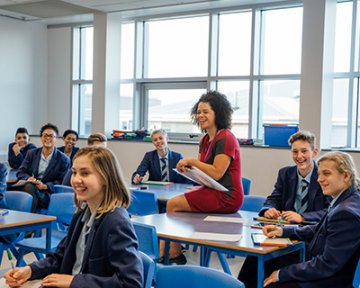 Singer Lily Allen is perhaps not best known for her views on education. But instead of hitting the press for a new album release, Ms. Allen’s phone-in to LBC radio to challenge education minister Nick Gibb propelled her, and her views, into the spotlight for a highly pertinent and topical reason.

Calling for an ‘introduction to divorce’ to be taught in schools, Allen addressed an issue that has been swept under the carpet for far too long.

It is estimated that one in three children in the UK will experience parental separation before the age of 16. Approximately half of couples divorcing in 2010 had at least one child aged under 16, and over a fifth were under age five.

Understandably, one of the principle considerations when a couple chooses to divorce is the effect this separation will have on their children: psychological and physical health can suffer, and children of separated parents are more likely to have behavioural problems and exhibit anti-social behaviour whilst they come to terms with the change in lifestyle.

But there remains in the curriculum no mandatory agenda to address issues that affect such an alarming amount of children, nor prepare students of a more advanced age for potential relationship breakdowns in their future, leaving them vulnerable and naïve if they themselves experience a breakup of future marriages.

Ms. Allen’s suggestion that children be taught about “the dangers of marriage” instead of Maths and Science are then, perhaps, not as revolutionary as they appear.

Not only do many children experience the effects of their parents’ divorce, but many of them will grow up to go through the divorce procedure themselves. A recent government poll estimated 42 percent of marriages end in divorce, and the number is ever growing. Lily’s call for “real life skills”, including divorce, to be taught in school – “things that everybody needs to know about” – seems ever pertinent.

In a country whose curriculum is ever more compressed into a government-approved package, it is increasingly difficult to include divorce on the mandatory curriculum – and at a high financial cost.

Children who struggle with the impact of divorce are forced to seek out individual councilors at great cost to the state, or to a family already going through the financial strains a separation can bring. Added to that, the potentially alienating and isolating experience of this form of counselling can add to anti-social behaviour.

Some schools attempt to address issues of divorce in ‘PSHE’ groups or sociology classes. The BBC offers fantastic resources for classes attempting to tackle what is often a delicate topic. These lessons include as aims the acknowledgements that many “lives are affected by divorce – some for the better, some for the worse”, as well as the statement that “divorce is a fact or life”; key sentiments that are as proactively encouraging as they are informative.

But the current refusal to talk openly about divorce in many schools may be damaging, not only in the respect that it means support is often not adequately provided for children who are experiencing the collateral impact of separating spouses, but also that it reinforces a dangerous taboo.

Lily Allen may be an unconventional role model, but opening up discussions on divorce and its impact on children may help in more ways than one might think.

No such thing as a 'common law spouse'
This site uses cookies. Find out more. Continued use of this site is deemed as consent.   CLOSE ✖