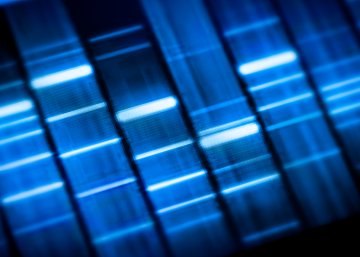 Mr Justice Peter Jackson, at Manchester Civil Justice Centre, ruled last week that a stored DNA sample should be tested to verify whether the deceased donor is the biological father of the applicant, and subsequently whether he has inherited a life-threatening disease.

Mr Anderson, who died intestate of a heart attack in 2012, had a sample of DNA stored in a hospital due to a previous bowel cancer diagnosis in 2006 (which was treated successfully at Manchester University Hospital). A blood sample was taken, and DNA extracted due to a family history of bowel cancer, and it was intended that the sample be used to test for genetic abnormalities in family members. The blood and tissue samples were later destroyed. However, the hospital confirmed to the court the DNA had remained in storage in accordance with the Royal College of Pathologists and the Institute of Biomedical Science guidelines.

Mr Spencer (30), applied to the court under s.55A of the Family Law Act 1986, for a declaration that his father was the deceased, and that the stored DNA sample be compared to a sample of his own in order to confirm paternity and to determine if he needed to undergo medical testing and possible treatment. The case came to court because Mrs Anderson (the deceased’s mother), requested in April 2015 that the hospital destroy the stored DNA sample.

The applicant was informed by his mother that he was conceived during a brief relationship she had with the late Mr Anderson in 1986, which ended when she was three months pregnant. His mother shortly began a relationship with a Mr Hall, and his name is on Mr Spencer’s birth certificate (aware that he was not the child’s father). The applicant’s mother later married a Mr Spencer, and it is his name the applicant now bears. Recent DNA testing has confirmed that Mr Hall and Mr Spencer are not the applicant’s biological father.

Mr Spencer has stated that Mrs Anderson contacted him in June 2013 to explain the hereditary cancer, and that the applicant should be tested to see if he was a relation and at risk. In September of the same year, Mr Spencer contacted the hospital to discuss the process of paternity testing, and in May 2015 he was seen by the hospital’s genetic counselor. Mr Anderson, his father, and his grandfather had all been diagnosed with bowel cancer at a young age, and if Mr Spencer was the son of Mr Anderson the hospital stated he would have a 50 percent risk of inheriting the predisposition (known as ‘Lynch Syndrome’).

Mr Justice Peter Jackson stated in his judgment that the hospital was taking a neutral stance in the proceedings. The Chief Executive of the hospital had written to Mr Anderson’s sister last August to state their position, and this was quoted in the judgment:

“Your brother provided the sample on the understanding that it would be used for genetic testing in respect of hereditary/genetic conditions in relation to himself and for other family members, specifically in relation to potential bowel cancer. As the DNA sample does not come under the jurisdiction of the Human Tissue Act because… it does not contain human cells, we have been advised that we can only release his sample if we receive written consent from both Mrs Anderson (as your brother’s next-of-kin) and from the putative son or on receipt of a court order. Otherwise, we will retain the DNA sample indefinitely, as is our usual practice.”

The courts looked at various legislation to determine if there was jurisdiction to direct that the sample be used. The Family Law Act 1986 (FLA) s.55A(1) states:

“Any person may apply to the High Court, or the family court for a declaration as to whether or not a person named in the application is or was the parent of another person so named…A court shall have jurisdiction to entertain an application…if, and only if, either of the persons named [are/were domiciled or habitually resident in England and Wales].”

Provisions in Family Law Reform Act 1969 (FLRA) apply only to cases of taking samples from living people, and make no reference to existing samples from deceased donors.

Mr Justice Peter Jackson concluded in his judgment that there is no legislation that can be applied to the present case, where the donor is deceased and the application concerns an existing sample, without drastically re-interpreting statutes. Therefore, he stated “there is no statutory power to direct post-mortem scientific testing.”

In terms of the respondent’s argument that a ruling in the applicant’s favour would be against public interest and affect third parties, the judge stated that “an intervention…might give rise to uncertainty and concern within the medical world and beyond at the possibility that such orders might be made in other cases, or that in effect the door was being opened to post-mortem paternity testing on demand…there is no sign that the present application has caused alarm to the major hospital involved in the present case (indeed it appears to welcome the court’s assistance), or that applications of this kind are likely to be at all numerous,” given that this is the first application of its kind in this jurisdiction. He noted that genetic testing would inevitably affect more than the individuals comparing DNA, but although the emotional well-being of the extended family should be considered, rights of third parties should not be definitive and prevent the court exercising their inherent jurisdiction.

Article 8 of the European Convention on Human Rights (right to respect for his private and family life) is concerned with both the interests of the individual, and of family members. It was considered closely by the European Court of Human Rights in Jaggi v Switzerland which concluded that the right to an identity and one’s parentage is integral to the notion of private life. It was made clear that a person could not be compelled to give a sample of DNA if they refused consent, and that there had to be, on the other hand, an appreciation of the inviolability of the deceased’s body.

The judgment concluded that there are no statutory powers or directions with regards to DNA testing to determine biological relationships when the donor is deceased, but that the High Court possesses an inherent power to order such testing, in circumstances falling outside the scope of FLRA, to prevent injustice. Mr Justice Peter Jackson set out six reasons for his decision:

“(1) If the application for a declaration of parentage had appeared to be speculative or opportunistic, the request for scientific testing would probably not have succeeded. However, the overall evidence here raises the real possibility that Mr Anderson was Mr Spencer’s father, he having undeniably been in a relationship with Mr Spencer’s mother at the time of conception.” “(2) It is common ground between the parties that there is a significant medical issue that turns on the possibility of a biological relationship between Mr Anderson and Mr Spencer.” “(3) Although it is possible that the late Mr Anderson might have refused to consent to testing during his lifetime, there is no particular reason to regard that as likely. Whether or not he would have welcomed the possibility that he was a father, it may not do justice to his memory to assume that he would have withheld his support from a young man who might have inherited a serious medical condition from him.” “(4) The information, in the form of the DNA sample, is readily available and does not require physically intrusive investigations’ .” “(5) There is no objection on behalf of the hospital, which might be seen as being a nominal representative of the public interest in this case.”

Finally, with regards to the interests of third parties, he stated:

“(6) …There is no indication of any real risk of harm and the establishment of the truth carries greater weight than the question of whether it is palatable.”

Therefore, due to the fact that there was clear evidence of a relationship between the late Mr Anderson and the applicant’s mother, and consequently a significant possibility that the applicant had inherited a serious illness that would require immediate investigation, Mr Justice Peter Jackson ordered that DNA testing should be done. Such a ruling, he stated as “a proper exercise of the court’s inherent jurisdiction,” as “knowledge of our biological identity is a central component of our existence.”

Man who claimed ex-partner was just a lodger ordered to hand over share of his house
This site uses cookies. Find out more. Continued use of this site is deemed as consent.   CLOSE ✖