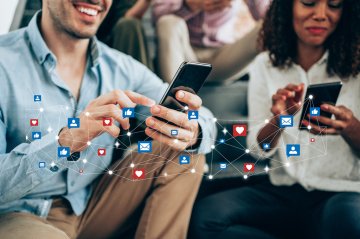 Social networking has become a primary tool for communication and is increasingly becoming seen as a double-edged sword when it comes to divorce proceedings.

In the last year alone, a surprising number of divorce petitions have included references to Facebook or Twitter in order to prove a partner’s unreasonable behaviour or infidelity. Many petitions have cited a cheating partner’s flirtatious exchanges with another or incriminating photographs being posted online.

Once in proceedings, social media users should also be very cautious of their online activity. In financial proceedings, casually posting photographs or comments with reference to a recent exotic holiday or an expensive purchase, could inadvertently alert a divorcing partner and provide them with a glimpse of their spouse’s true financial activities, which may well be very different from the financial hardship that they are portraying to the court. Similarly, in respect to professional networking site LinkedIn, a spouse updating their profile with a new job or promotion may alert the other to a new salary and income.

If account settings are enabled, the movements of a Twitter or Facebook user can be tracked by others by way of ’checking in’ or ’tagging’. This can provide a divorcing spouse with crucial evidence if trying to prove jurisdiction on the basis of habitual residence or domicile. A regular pattern of posts in a certain country could have weight to explain where a spouse has been residing.

In reality, divorcing spouses would have deleted the other from contact on such sites by ’unfriending’ or ’unfollowing’ them. However, there is nothing to stop a mutual friend, who is still connected to both parties but loyal to one, from providing a steady stream of information to discredit the other.

Facebook has only been around for eight years, and Twitter even fewer, yet already they have a growing influence on evidence used in legal proceedings. With further similar apps and sites being developed at a rapid pace, it is reasonable to consider that in the near future a considerably greater significance will be placed on social media exchanges.

So think twice before you post on social networking sites: it may come back to haunt you.

To read more about social media and divorce, click here

Publication of judgments in the Family Courts
This site uses cookies. Find out more. Continued use of this site is deemed as consent.   CLOSE ✖