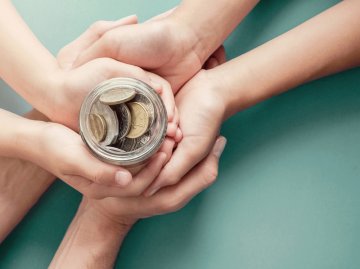 The hedge fund boss of a children’s charity has been ordered to pay his ex-wife’s own charity £282 million. In 2014, Sir Christopher Hohn, knighted for services to philanthropy and development, paid Jamie Cooper £337 million in their divorce settlement, at the time believed to be the biggest payout in UK legal history.

Sir Christopher Hohn and Jamie Cooper, both 53, met when they were students at Harvard then tied the knot in 1985. After a 17-year marriage and four children (three of whom triplets), the couple divorced in 2014. Their separation caught the media’s attention, not only because of the £700 million assets involved, but because Sir Christopher was one of the very few individuals successful in claiming ’special contribution’.

The Evening Standard reports that judge Sir Geoffrey Vos, Chancellor of the High Court, decided that Sir Christopher’s charity, the Children’s Investment Fund Foundation (CIFF), would pay Ms Cooper’s Big Win Philanthropy £282 million. The parties established CIFF together in 2002 with the aim of protecting children in developing countries through strengthening laws against exploitation and investing in low-carbon energy. The charity was managed by Ms Cooper while Sir Christopher led the associated hedge fund, donating much of its profits to the charity. After the divorce in 2015, Ms Cooper went on to found her own charity, Big Win Philanthropy.

Over April and July 2015, the settlement was amended to include Ms Cooper’s agreement to resign as a trustee of CIFF and for her ex-husband to make a grant to her new charity. Ms Cooper promised to contribute £32 million of her own funds to the charity if the CIFF payment is successful.

Sir Christopher, with the conviction that charity funds should not be utilised in a divorce payout, was against making the payment. His lawyer, Jonathan Crow QC echoed this saying:

“The grant would set a poor precedent in that it would allow charitable funds to be used to resolve personal dispute between trustees”.

However Ms Cooper’s lawyer Simon Taube QC argued that the grant would be a much-needed boost to support her talent and “unleash her creativity and her capacity to contribute to the public benefit”. Sir Geoffrey eventually decided that the charitable benefits of the grant would outweigh the arguments against it, keeping in mind Ms Cooper’s own promise to donate. He concluded: “the making of the grant will … bring a conclusion to this incredibly hostile dispute”.

Since the original 2014 Cooper-Hohn divorce settlement, only one payout is believed to have topped the sum. This case concerned a Russian oil and gas trader who was ordered in May 2017 to pay his estranged wife an awesome £453 million.

Sir Geoffrey made an unprecedented decision in this case to tie up the parties’ philanthropy with divorce proceedings. This ruling is particularly interesting because, for both Sir Christopher and Ms Cooper, charity is not only personal but professional. However, with greater pressure on the mega rich to contribute back to society, it is possible that the UK courts will see more divorce cases involving charitable funds and donations in the future.

Acrimonious divorces can damage children’s immune systems
This site uses cookies. Find out more. Continued use of this site is deemed as consent.   CLOSE ✖