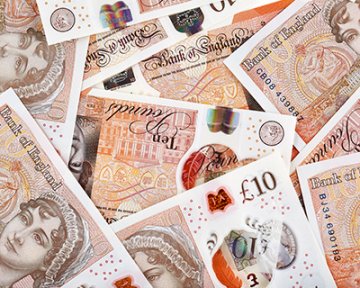 Mrs Justice King has allowed a husband’s appeal against a provision of an award in favour of his ex-wife, which required him to pay maintenance in the sum of 25 percent of his annual net bonuses, in addition to £3,750 per month from his salary, for the remainder of their joint lives.

The initial hearing was heard by DJ White. At the date of that hearing, the husband was 43 and the wife was 55. They had been married for 14 years and cohabiting for 19. The husband was a high earner, for the past three years receiving a salary of £250,000 and a non-guaranteed bonus of £200,000 per annum. The wife had not worked for the last fifteen years. In his order of 20 March 2013, DJ White provided that the wife would receive capital of £967,170, the husband capital of £250,362 and the wife maintenance of £3,750 per calendar month, in addition to 25 percent of the husband’s annual net bonuses, on a joint lives basis.

DJ White justified the bonus part of his order in the following terms:

"I appreciate that going forwards the wife would be making no contribution towards such bonuses and in my order her basic needs are met, but I do consider it legitimate that she has earned an interest in his income going forwards."

The husband applied for permission to appeal against the maintenance part of the order (both the monthly maintenance and the share in the bonuses).

In B v S EWHC 265 (Fam), Mostyn J held that periodical payments should, save for in exceptional cases, be settled by reference to need alone. Professor Bailey-Harris’s assertion was, therefore, that DJ White’s approach was contrary to this principle. Mr Johnson, for the wife, argued that DJ White’s words were capable of an alternative interpretation, focusing on needs alone.

Mostyn J, when allowing the appeal, gave a strong steer that, in his view, a cap should be placed on the amount of the husband’s bonus the wife could receive.

King J heard the appeal and preferred Mr Johnson’s interpretation of DJ White’s intentions. King J was assisted in reaching this view by DJ White’s clarifying comments, in a supplementary judgment, that he referred in his order to “the wife’s ‘basic’ needs being met”, noting that “this is far from needs being ‘generously interpreted’” and adding that he would “certainly have made a higher periodical payments order had the husband not denied the probability of future significant bonuses”.

In reaching her decision, King J considered the legal basis of an appeal, namely that, according to Family Procedure Rule 30.12(3), an appeal will only be allowed when the decision was either wrong or unjust because of a procedural or other irregularity in the proceedings.

Further, Thorpe LJ’s principle from Cordle v. Cordle EWCA Civ 1791, that an appeal will only be permitted if “there has been some procedural irregularity or that in conducting the necessary balancing exercise the district judge has taken into account matters which were irrelevant, or ignored matters which were relevant, or has otherwise arrived at a conclusion that is plainly wrong”, should be considered together with Rule 30.12(3).

In applying these legal principles, King J determined that she was satisfied that DJ White “intended to and made his order wholly in terms of maintenance requirements and not in relation to a continuing ‘share’ of H’s bonus outwith any maintenance”. She determined that had the proportions of salary to bonus been different, with more income and less bonus, DJ White would have made the basic maintenance award higher. Given the intrinsic uncertainty of bonus payments, a percentage, as opposed to a specific figure, had to be used.

King J held that she could not say that such an approach was “wrong”. She did, however, find that DJ White erred in failing to set a cap beyond which the husband would not have to pay the wife 25 percent of his net bonus, as this inherent uncertainty of bonus payments meant that a cap was essential in order to avoid the inadvertent unfairness which could arise as a result of an unanticipated substantial bonus payment. The appeal was therefore allowed in this regard and a cap of £20,000 per annum was set.

For more information about division of assets on divorce, click here

New Year Legal Eagles: Ayesha returns to This Morning
This site uses cookies. Find out more. Continued use of this site is deemed as consent.   CLOSE ✖