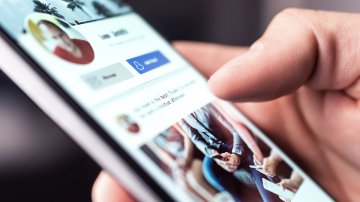 In New York, Supreme Court Justice Matthew Cooper has made a landmark ruling in American divorce law. The ruling, in the case of Baidoo v Blood-Dzraku, permitted Ms Baidoo to serve divorce papers on her husband solely by the use of Facebook. Whilst this may sound extreme, the reality was that Ms Baidoo had been attempting to serve divorce papers on her husband via the traditional methods for many months, without success.

Ms Baidoo and Mr Blood-Dzraku married in 2009 but the relationship soured when Mr Blood-Dzraku broke a promise to his wife to hold a traditional Ghanaian ceremony. Ms Baidoo kept in contact with her husband via phone and Facebook but the only address she had for him was at an apartment that she knew he had moved out of in 2011. He had also refused to make himself available to be served the divorce papers after phone calls and texts from his wife. Enquiries for an address were made via the Post Office, his mobile phone company and the Department of Motor Vehicles but none had any record of address for him. The lawyers involved in the case even went so far as to hire a private detective, without success. The only evidence the lawyers had to work with was that Mr Blood-Dzraku was regularly checking his Facebook account.

The judge in the case concluded that, “Inasmuch as plaintiff is unable to find defendant, personal delivery of the summons to him is an impossibility” and as such, “… is granted permission to serve defendant with the divorce summons using a private message via Facebook”. The exact terms required Mrs Baidoo’s lawyer to log into her Facebook account, identify themselves to the husband and then send either a web address or an image of the summons to him. Mrs Baidoo was restricted from sending the message herself in much the same manner as you cannot serve papers in person yourself.

The judge reasoned his decision in light of the ascendency of social media and the importance of ensuring that a person subject to divorce proceedings is aware of and afforded the opportunity to appear in the action, “Under the circumstance presented here, service by Facebook, albeit novel and non-traditional, is the form of service that most comports with the constitutional standards of due process. Not only is it reasonably calculated to provide defendant with notice that he is being sued for divorce, but every indication is that it will achieve what should be the goal of every method of service: actually delivering the summons to him”.

Whilst a significant proportion of correspondence in legal practice is now via email, it was only very recently that the Court in England and Wales permitted service of divorce petitions via email, and it remains a fairly uncommon practice. It now appears that America is approaching a digital era in the developing law of service and the question is: will we follow suit?

In England and Wales, the Family Procedure Rules state that an application may be served by any of the following means (FPR r.6.4):

– First class post or other service which provides for delivery on the next business day;

– Document exchange where a solicitor is instructed by the Respondent to accept service.

If none of these methods are practical, you can apply to the court for service by an alternative method e.g. for it to be served at another address, via email or via fax. The rules also allow for what is known as ’deemed service’ when the judge is satisfied that the Respondent has received the papers but not acknowledged them, or if all permitted methods of service have been exhausted. Naturally, the problem with personal service is that often people are hard to track down. Some may anticipate the papers and evade service but others are so estranged from their partner that one may no longer know of the other’s whereabouts. Personal service is clearly the ideal method of service but cannot always be achieved. It is possible to imagine an example where all other given methods are defunct, such as in this American case. Taking a creative approach to reaching the same end goal surely cannot be a bad thing. In the case of Facebook, with its 1.3 billion users, many people check their account several times per day, significantly increasing the chance of the messages being seen by the intended recipient.

So while at first glance the decision may seem a radical departure from traditional methods of service, if the intended outcome is enhanced the question is surely, why not? Is it not better to reach the intended outcome, as Cooper J stated, than do what has always been done? Whilst undoubtedly, the circumstances of this case are unusual, there are no doubt many more on a par with it. Such a departure from traditional methods may also help when serving divorce papers outside the jurisdiction, which is often a more difficult process in any event.

This case has highlighted a very real problem for petitioners and lawyers alike. However, it seems unlikely that we will see service via Facebook as common practice in the near future. Cooper J himself set the standard as one that requires “… a compelling reason to make Facebook the sole, rather than the supplementary, means of service, with the court satisfied that it is a method reasonably calculated to give defendant notice that he is being sued for divorce”. That said, it remains to be seen whether this landmark ruling ignites a wave of similar cases in New York and whether it has any impact on our own legal system.

The Casanova and the "calamity": celebrity blended families and media judgement
This site uses cookies. Find out more. Continued use of this site is deemed as consent.   CLOSE ✖