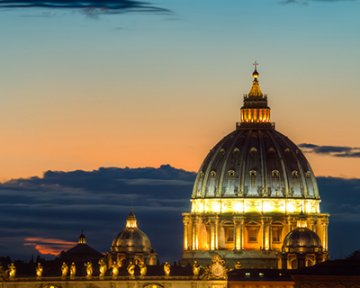 Hundreds of thousands gathered in Rome last week to protest a bill that would grant adoption, medical and inheritance rights to gay couples.

Italy is the only major western European country not to recognise same-sex unions or marriages.

The event’s organisers claim that two million protesters attended, though reporters at the scene estimate the crowd at closer to 300,000, said BBC News.

The most contentious aspect of the proposed legislation is to allow same-sex partners to adopt each other’s biological children. Many protesters carried signs reading, “Children have a right to both a father and a mother.”

Some suspect that new adoption regulations would lead to more relaxed surrogacy laws; surrogacy is banned in Italy and is often snidely dubbed “womb-renting.”

The bill also proposes to grant people in same-sex unions the right to make medical decisions for their partner and to inherit from them. Currently, as homosexual unions are not legally recognised, people are unable to visit their partner in hospital if the latter’s family objects. The family will also be charged with medical decisions.

Moreover, if the patient passes away, 50% of his or her estate will pass to the family, while the partner will have to pay a 30% inheritance tax on the remainder.

Italians remain starkly divided on the issue. The protest in Rome followed pro-gay rights rallies held the week before in an estimated 100 cities across Italy. A 2012 government poll found that a quarter of the population considered homosexuality to be an illness, while two thirds believed that same-sex partnerships should afford the same rights as marriage, according to The Guardian.

Of course, the Vatican plays no small role in Italy’s stance on gay rights. Pope Francis, despite having a more liberal image than many of his predecessors, has not strayed from the traditionally Catholic position on gay marriage. “There cannot be confusion between the family wanted by God and every other type of union,” he declared earlier this year.

Nevertheless, Italian politicians have shown support for gay and lesbian couples; the mayors of Rome and Naples have formally recognised same-sex unions carried out abroad, despite the ban on such unions in Italy.

The fate of the bill to legalise same-sex unions will be decided later this month.

Update: On May 11th 2016, the Italian Parliament gave final approval to a law recognizing civil unions of same-sex couples. The vote — 372 to 51, with 99 abstentions — was followed by long applause in the Chamber of Deputies, the lower house of Parliament.

Alternative dispute resolution: mediation
This site uses cookies. Find out more. Continued use of this site is deemed as consent.   CLOSE ✖