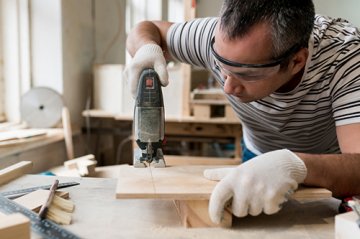 According to a report in the Moscow Times, Moscow City Hall has rolled out a social services scheme that offers residents a handyman’s help on demand whenever there is a requirement for traditionally ’masculine’ work. In other words, fixing shelves and repairing leaking taps.

According to the website of private company, Moscow Husband For An Hour, they’re concerned that the female of the species will struggle with such tasks, or be unwilling to perform them. Here’s the website statement on the matter:

’You’ve just spent a long time in a store selecting a new light fixture for your hallway to perfectly match your new décor…But you’re a beautiful woman with a killer manicure, and you’re not ready to get intimate with a buzzing and horribly vibrating drill. Who can come to your aid?’

The answer, it seems, is any one of a range of male DIY experts, specifically ’young and strong men with a huge set of technical skills’. These men will also be ’assertive’ and will ’call themselves your husband for an hour’. Indeed?

This is a service that has existed in the private sector, but is now being extended to low-income families, for whom it will be free. For those with greater means, there will be a ’moderate’ fee. So far, the most enthusiastic take-up seems to have come from the younger and elderly sections of the population.

Not that this is the first instance of these kinds of services; the Moscow administration already offers domestic services to elderly or disabled people that are usually viewed as ‘women’s work’ such as cooking or cleaning. However, there’s nothing to suggest that the female workers who perform these duties should be referred to as rental ‘wives’.

Laura Bliss in an article for The Atlantic, comments: %27Let’s just leave "pity" for the "manicured sex" out of it%27. Bliss also pointed out that Russia has an extraordinarily high divorce rate, and she’s not wrong: historically, Russia has had one of the highest divorce rates in the world.

Family courts to give children more of a voice, Justice Minister tells the FJYPB
This site uses cookies. Find out more. Continued use of this site is deemed as consent.   CLOSE ✖