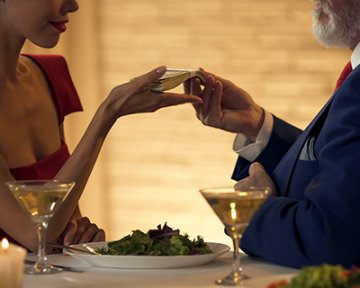 In the latest development of the Sumner Redstone elder abuse lawsuit, the media mogul’s ex-girlfriend, Sydney Holland, has claimed that he gave “tens of millions” to mistresses and lovers while they were together.

The evidence was part of Holland’s new complaint, filed on Monday. In October this year, Mr Redstone sued Ms Holland, 44, and another former companion Manuela Herzer, 52, for elder abuse. The pair allegedly “commandeered” the 93 year old’s life and over the course of five years manipulated him out of $150 million which Mr Redstone wants returned.

The counterclaim alleges that Mr Redstone often made gifts of millions of dollars to women and was mentally competent to do so. The Viacom shareholder lawsuit was put on hold in October due to fears for Mr Redstone’s poor health and his health and mental capacity

The ailing billionaire, allegedly “obsessed with sex and steak”, met Sydney Holland through the notorious Millionaire’s Dating Club in 2010. The two became inseparable and Ms Holland moved in with him and his long-term companion Ms Herzer the following year. After five years together and an engagement, Mr Redstone turned Ms Holland out of his house, reportedly in anger over discovering her relationship with a former actor named George Pilgrim.

Ms Holland defended the large amount Redstone spent on her while they were together, arguing that this was typical of his behaviour and that, while she had agreed to make him the “center of his universe”, he had lavished millions on “women who did nothing more than provide sexual favors.”

Holland’s counter-complaint offered up a long list of instances where Mr Redstone had gifted millions of dollars to women he had been involved with, none of whom have yet been identified. One mistress said to be an aspiring reality show producer was reportedly given $21 million and a flight attendant on the CBS corporate jet just approximately $18 million. Holland also claims that he later slept with the flight attendent’s sister and gave her $6 million. She describes how three other women other women had over 50 million between them, a student at the University of Southern California had her tuition paid, with her and a Paramount employee received an undisclosed amount.

Redstone’s legal team called the complaint a “work of fiction punctuated by not-so-subtle threats of extortion and an overwhelming stench of greed.”

Court orders that it is "essential" for children to see father who has left Ultra-Orthodox religious community
This site uses cookies. Find out more. Continued use of this site is deemed as consent.   CLOSE ✖