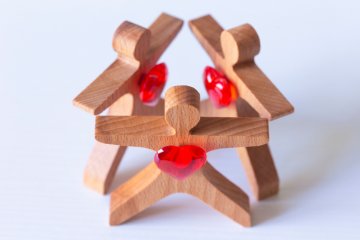 A polyamorous couple from Austin, Texas are divorcing after a 12-year marriage in order not to make their girlfriend jealous. Once divorced, Cristina and Benno Kaiser will decide which one of them will marry their lover, Sierra Kuntz, so that she can obtain legal rights to their three children.

Benno, 37, and Cristina, 31 met when they were both serving in the military police in Virginia and four months later they tied the knot. Together they have three children: Isaiah, Rebecca and Brianna.

According to the Daily Mail, although the pair were happily married, bisexual Cristina felt like something was missing from her love life. At first, the couple decided to begin an open relationship but it was Cristina who suggested introducing a woman into their marriage.

Cristina met Sierra, 21, at a local shopping centre in Las Vegas where the latter was working in a pet shop. After a few successful dates, Cristina suggested to Sierra the idea of joining her marriage. Although Sierra was at first concerned that the couple were just going through a phase and she would become “disposable”, she agreed to give it a go. Once Benno had met Sierra it became evident that all three of them were committed to making the “three-lationship” work.

It is reported that, when Sierra moved in, she became the primary care-giver to the couple’s children as they both worked as legal assistants. The kids eventually became so accustomed to her that they now call her “mommy” and, according to Benno are “very supportive” of the familial change. Sierra comments:

“I’m not jealous that the children are not biologically related to me at all. Just because I didn’t birth them doesn’t mean I can’t love them and they can’t love me. That doesn’t hinder my love at all for them.”

Having become a part of the family in all but law, Benno and Cristina decided to divorce to prove to Sierra that they are all equal. Once the divorce is finalised this year, they will chose who is to marry her so that she will be legally recognised as part of the family. Sierra does not mind whether she marries her boyfriend or girlfriend.

Now all sharing the same bed, the Daily Mail reports that Cristina claims that she feels “complete” but her husband admits that “this lifestyle isn’t for everyone”.

The courts now recognise legal, genetic and psychological parents but applying for parental responsibility, especially if you are not a biological parent, remains a complex process. Although polyamorous marriages are not currently legally recognised, the fact that a very similar situation to this appeared earlier this year demonstrates that there is appetite for a more flexible understanding of marriage and parenthood. As the law has revised itself multiple times over the last ten years owing to changes in legislation for same-sex couples, it is unlikely that we will have to wait too long for “three-lationships” like this to become less of a legal anomaly.

Phil Collins v Lord Wilson: are prenups “unethical”?
This site uses cookies. Find out more. Continued use of this site is deemed as consent.   CLOSE ✖