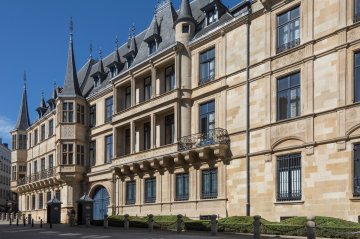 It has been confirmed that Princess Tessy of Luxembourg has launched proceedings in London to settle a dispute with Prince Louis over their divorce settlement.

Princess Tessy, formerly Tessy Antony, met Prince Louis, the third son of the Grand Duke of Luxembourg, when he visited the army while she was serving in NATO’s peacekeeping force in Kosovo. The couple married in Luxembourg in 2006, six months after the birth of their first son, Prince Gabriel. They then went on to have one more son together, Prince Noah.

The couple’s intention to divorce was announced by the Grand Ducal Court of Luxembourg in January 2017. A statement was released by Princess Tessy at the time which stated that, despite the separation, the couple “will always remain unified by parenthood” to their two sons. Decree nisi was then granted by Judge Richard Robinson in February.

On Luxembourg National Day on 23 June 2009, Tessy Antony was given the title ‘Princess of Luxembourg’ and their sons the title ‘Prince of Nassau’. Once the divorce becomes final, Princess Tessy will lose the title of Royal Highness and will no longer be referred to as a princess. She was removed from the website of the Luxembourg royal family earlier this year when the intention to divorce was first announced.

London is often the preferred choice for the economically weaker party in a divorce because English courts recognise that there should be no discrimination between contributions made by a homemaker and a breadwinner. Princess Tessy, having married into the Luxembourg royal family, is likely to secure a more generous settlement in the English courts than if her case was to be heard elsewhere.

The preliminary hearing took place on 13 October 2017 at the Royal Courts of Justice. A High Court judge has imposed interim reporting restrictions so no financial details of the disputed settlement can be disclosed at this point. Deborah Bangay QC, representing the Princess, said that her client was left with “no option but to pursue in this litigation” because her “very reasonable and sensible proposal” was rejected by Prince Louis.

The Princess has received a lot of negativity throughout the proceedings and has been branded a ‘gold digger’. The media has accused her of marrying Prince Louis for her own financial gain and a Luxembourg magazine has written cuttingly that Princess Tessy will ‘always remain the daughter of a roofer’. Deborah Bangay QC maintains that Princess Tessy is "far from” a gold digger" and will be “seeking a fair and proper settlement”. Indeed Prince Louis’ counsel, James Ewins QC, also responded saying that his client is “appalled” at the media accusations and that they will do what they can to stop this continuing.

Although neither party is British and the couple were married in Luxembourg, the Princess’ ability to claim for the divorce and financial proceedings to be heard in the UK may be because the couple are currently based in London: they moved to Kensington in West London to raise the children who both attended a boarding school in England. If the Princess succeeds in getting her case heard in the English courts, she will benefit from the judge taking an equal division of matrimonial assets as a starting point.

Singaporean man to appeal decision preventing him from adopting surrogate child
This site uses cookies. Find out more. Continued use of this site is deemed as consent.   CLOSE ✖