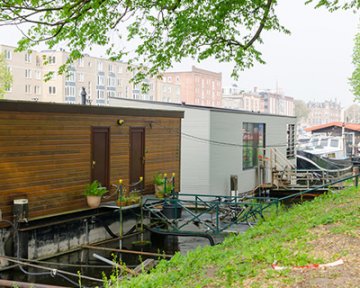 A Dutch firm has designed a floating house that can be separated in half, allowing both parts of a separating couple to retain their home after the dissolution of their marriage. Omar Kibri, a self-proclaimed PR and pop culture expert, partnered with architectural firm Studio OBA to bring the design to life.

Kibri was inspired to create the design in response to rising divorce rates in the Netherlands, and hopes the separating house will help to make the process of breaking up less of an upheaval. “With the increasing number of divorces each year, our concept is – regrettably – becoming more and more relevant,” said Kibri. “I especially like the fact that we can stabilise the home front during an otherwise very hectic time. With this concept you namely don’t need to relocate after a break-up.”

Who retains the family home – and whether or not it can be retained at all – is often a key question in divorce settlements. For those over fifty, it’s becoming increasingly likely they will have to sell their houses should they divorce their partner. So could Kibri’s design really be a practical solution?

One of the main difficulties of implementing such a design in the UK is the fact that the house floats. Floating architecture is becoming increasingly common in the Netherlands, with its plentiful canals, but it’s yet to take off over here.

There’s also the name of the concept – prenuptial housing. Presumably decisions about how and when to separate the house, as well as who gets which half and what contents, would be included as part of a prenuptial agreement. Under UK law, prenuptial agreements are currently advisory only, and are not actually legally binding. However, if the house can be easily and equally split, it should prove easier to divide between separating partners than any other property.

Vincent Ringoir, who runs Studio OBA, has high hopes for the prenuptial housing project. “The challenge of the project was to design a house that consists of two autonomous units that appear to be one,” Ringoir said, “Due to the way we designed it, the house responds to the flow of the relationship: when all is well, the house remains a unity, but when couples separate, the house – literally – drifts apart as well. And how nice would it be if separate units would one day reconnect again when a new relationship blossoms?”

To read more about the law behind prenuptial agreements, click here

Former Pirelli model seeks £250 million from ex-husband
This site uses cookies. Find out more. Continued use of this site is deemed as consent.   CLOSE ✖