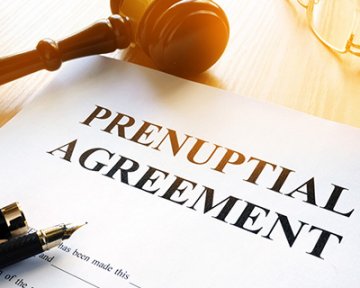 2016 has marked a year of upheaval and uncertainty. In the year where Donald Trump, the most unlikely of candidates, has been elected as the new President of the United States, and the referendum has put England’s exit from the European Union into motion, the public have been alerted to the fact that we cannot predict the future with any sense of certainty.

Whatever your political inclination, these machinations are pertinent to the ongoing evolution of prenuptial agreements within the UK. Often seen as introducing an unsavoury dose of bitter realism into the romance of the big day, the prenup can be considered an Americanised initiative that indicates a drive for money over love. Particularly in light of recent events, however, prenuptial agreements should instead be encouraged and embraced as a method of mitigating against the unexpected.

The past ten years have seen a seismic change in the courts’ approach to pre and post nuptial agreements affording more power and autonomy to the parties concerned. In Macleod v Macleod, Baroness Hale declared that such arrangements were no longer contrary to public policy. This conception was further extended in 2010 where the Supreme Court’s landslide ruling in Radmacher v Granatino gave significant weight to the prenuptial arrangement between a German heiress, represented by Vardags, and her husband. Such developments have paved the way for both parties to a marriage to more readily dictate their expectations and protect their wealth in anticipation of marriage.

Unlike the current political climate, this progress signifies a movement towards a future that is both more certain and better protected. Nevertheless, the notion of a prenuptial agreement can often be preconceived as a safety mechanism for the rich and cynical alone.

In the same way that Trump’s announcement of his presidential candidacy was met with derision, a prenuptial agreement can appear initially laughable to those in the midst of heady romance. However, as the recent presidential campaign plunged into an increasingly unpleasant battle of clashing ideas and bitter discourse, so too can a marriage be derailed by the unexpected challenges life brings to even the happiest of couples. The mere lack of contemplation of such events is, sadly, not enough to prevent their occurrence.

Developments in the approach to marriage are also mirrored in the recently published figures of cohabiting couples in the UK increasing from 1.5 million families in 1996 to 3.3 million families in 2016. Whether married or not, it is evident that societal changes are gearing towards impermanent relationships. As a result, cohabitation agreements are also to be encouraged where couples may have assets in their joint names.

In a period of legal and political adjustment there is a significant lesson to be learned; one cannot protect oneself from the anticipated division surrounding Donald Trump’s new status as the world’s most powerful politician, but we can more readily defend ourselves from the consequences of a fractured family. Change is often unpleasant and uninvited. Pre-emptively preparing oneself can not only save time and money but will also provide the comfort of certainty in the unknown future.

To find out more about prenuptial agreements, take a look at our family law guide.

Witnessing wills using video conferencing – a welcome change or a risky reaction to COVID-19?
This site uses cookies. Find out more. Continued use of this site is deemed as consent.   CLOSE ✖