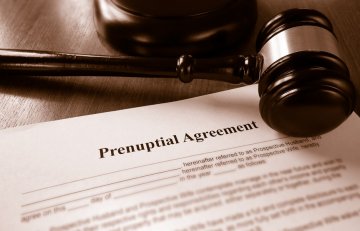 The story of the Saudi groom who asked for a divorce just two hours after tying the knot made headlines when it was revealed in 2016 - and not just because of the brevity of the marriage. According to Gulf News, the unnamed man called time on the marriage upon the discovery that his new bride had shared photographs from their wedding with her friends via Snapchat. This breached the couple’s prenuptial agreement, which prohibited the wife from posting photos or videos of the event on social media.

"There was a prenuptial agreement she would not use social-media applications such as Snapchat, Instagram or Twitter to post or send her pictures which she did sign", the bride’s brother told Saudi Arabian newspaper Okaz.

“It was included in the marriage contract and became binding. Unfortunately, my sister did not honour the pledge and used Snapchat to share pictures from the wedding ceremony with her female friend.”

In 2014 a New York attorney told ABC News that "about a third of her clients" are interested in including a social media clause in their prenuptial or postnuptial agreements. Such clauses typically prohibit the sharing of potentially embarrassing or reputation-damaging photographs online.

Our President Ayesha Vardag included a social media clause in her own prenup, which specified that if her marriage were to end, both parties would be obliged to seek out the other’s permission before posting photos or confidential information concerning them:

“If you break up that takes away that right to share your confidential information...I think it’s incredibly helpful to because it enables you to be more trusting. Sometimes things go wrong and you don’t want to be in a mess if they do.”

Although prenups most commonly include provisions for the division of property and spousal maintenance in the event of divorce, many couples have more niche concerns as they prepare for marriage. BBC News cites a 2008 investigation by the Chicago Sun-Times, which found a variety of unusual prenup clauses, including the right to conduct random drug tests on a spouse, the stipulation that a husband could only watch one football game per week and a claim on all frequent-flier miles if the spouse is unfaithful.

Whilst some might find such prenuptial clauses funny, bizarre or unpalatable, providing that neither party has not been coerced into signing the agreement, knowing one’s future spouse’s marital expectations ahead of tying the knot can reduce the likelihood of acrimonious disputes further down the line.

It’s important to keep in mind that the UK courts will not uphold a prenuptial agreement if they determine that it has not been entered into freely, or is unfair - i.e. it’s provisions do not meet a party’s reasonable needs. Couples entering into such an arrangement would therefore be advised to thoroughly examine their agreement in order to ensure that it is fair to both parties and thus legally enforceable.

To learn more about prenuptial agreements, read our Guide to Divorce here.

The end of talaq in India? Supreme Court could declare practice unconstitutional
This site uses cookies. Find out more. Continued use of this site is deemed as consent.   CLOSE ✖