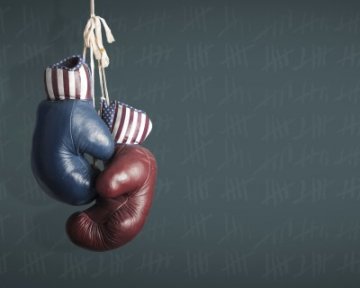 In July, a despairing Remainer wrote to The Guardian agony aunt Mariella Frostrup regarding the ruinous effect of the EU referendum on her relationship. The writer expressed having “never felt so isolated in..…life” after her partner voted to leave the European Union, and was at a loss as to how to resolve the “catastrophic situation”.

Although, as Ms Frostrup astutely remarks, the couple’s differences appear to predate Brexit, it seems that the letter-writer is not alone in experiencing relationship problems over this year’s highly divisive referendum.

Last week, chair of Resolution Nigel Shepherd warned that Brexit could be the breaking point for couples whose marriages are on the rocks. Quoted in The Guardian, Mr Shepherd claimed that Resolution, the largest family law organisation in the UK, “have come across a number of families in this country because one them voted differently in the referendum.”

Mr Shepherd acknowledged that, while it’s “unlikely” for Brexit to be the “sole reason” for divorce, for many “it was the last straw that made them think ‘we are really incompatible’.”

But it’s not just in the UK that couples are struggling to bridge a political chasm -2016 has been a particularly trying year for those whose political views diverge from their spouse’s across the pond. I refer, of course, to the US presidential election.

Back in August, The New York Times profiled two couples whose marriages were thrown into turmoil after it emerged that one party would be voting for Donald Trump, whilst the other plumped for Hillary Clinton. Dr Kerry Maguire, of Massachusetts, went so far as to issue her husband an ultimatum—if he voted for Trump, she would divorce him and move to Canada.

In both profiles, it is the wife who is opposed to Trump. This is perhaps unsurprising, given the plethora of controversial remarks that the president-elect has made about women in the run-up to the election. Although Trump did win over the majority of women voters, he only gained the vote of 45 percent of college-educated white women, compared to 51 percent who voted for Clinton. This is a reversal from 2012, when Mitt Romney secured 52 percent of the votes of college-educated white women, compared to Barack Obama’s 46 percent. When it came to women of colour, Trump performed particularly poorly, with exit poll data indicating that 94 percent of black women and 68 percent of Hispanic women voted for Clinton.

Ipsos Public Affairs found that, in a online poll of 1,249 adults who have been in a relationship of at least four years, men voting for Trump were the least confident that their spouses would vote the same. Of course, political differences within a marriage don’t necessarily lead to divorce. This election season, one Florida-based couple even found humour in their divergent views, and erected two campaign signs on their lawn, one for Trump and one for Clinton, separated by a sign reading “divorce sale”. Predictably, the image went viral and the couple revealed that they had no intention of divorcing—the signs were simply a light-hearted means of defusing tension in a tumultuous political climate.

A 2014 study by researchers from Princeton and Stanford posited that the polarisation of the American electorate has “dramatically increased”, with partisanship having become a “social divide”, as well as a political one. To test this, the researchers conducted an implicit association test, which revealed that Democrats exhibit an automatic bias against Republicans, and vice versa. The incorporation of political affiliation as a core component of social identity could mean that individuals are less likely to marry those who identify differently politically in the first place, and that when political divisions do arise within a marriage, the ramifications on the relationship are severe.

So, how to avoid politics driving a wedge between yourself and your spouse? Perhaps one could heed the advice of American founding father Benjamin Franklin: “Keep your eyes wide open before marriage, half shut afterwards.”

Matrimonial mansion must be split by brick wall following owners' divorce, court rules
This site uses cookies. Find out more. Continued use of this site is deemed as consent.   CLOSE ✖