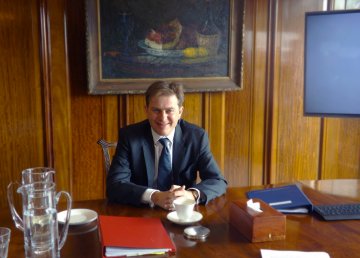 The newly revised judicial guidance about child arrangements in domestic abuse cases came into force earlier this month. Vardags was joined by Piers Pressdee QC on Tuesday morning to deliver a talk about these changes and answer a few questions about his practice.

A preeminent children law barrister, Piers was called to the bar in 1991 and took silk in 2010. He began his career in public children law handling child abuse cases before moving to 29 Bedford Row in 2011.

The image that emerged was of a "high-stakes and extremely emotive" area of law. Having gone into children law because "fundamentally it matters" he described his most memorable moment in a courtroom to me as seeing his client, a young father, reunited with his baby son at the end of the final hearing.

Noting the tragic prevalence of domestic abuse in private law cases, Piers explained how the newly-revised, more robust regulation saw greater emphasis placed on the safety of the children and carer.

When there are domestic abuse allegations, child arrangements become a delicate balancing act between the competing and sometimes incompatible demands of promoting parental contact and protecting children from harm. Amendments to the Children Act in 2014 saw the assumption that parental contact is beneficial to child welfare enshrined in statute.

However in the last year both Women’s Aid and the All Party Parliamentary Group on Domestic Violence raised concerns that the family court’s eagerness to promote contact “wherever possible” was putting children and mothers at risk.

What followed was a full review of the relevant guidance, Practice Direction 12J, conducted by Mr Justice Cobb. Published in January this year, the Cobb review recommended amendments that would strengthen the guidance and swing the pendulum, just slightly, the other way. The changes finally came into force on the 14 September.

The revisions emphasise more strongly that the guidance is obligatory, and highlight the importance of specialist training on domestic abuse to family court judges. “Safety of child and carer accorded greater prominence in the balancing exercise that has ‘contact wherever possible’ as its counterweight, Piers explains.”

Another major change is the use of the all-inclusive term ’domestic abuse’, replacing ’domestic violence or abuse’ and now broadened out to include culturally specific forms of abuse’. "Courts have wised up to the deep-seated impact that non-violent forms of domestic abuse can have." Piers explains, "I welcome the fact that we no longer talk about violence and not other forms of abuse. Abuse is not about violence, it is about control and entitlement."

Difficulties in identifying where domestic abuse has taken place still remain. "The court needs to be alive to the risk of exposure to a perpetrator of abuse. But it also needs to be alive to those who make false allegations. If the claims are unsubstantiated then you have destroyed a child’s relationship with the other parent for no good reason."

Eager to discern the legal reality from the media furore, I questioned Piers as to what impact introducing the statutory presumption that contact is beneficial, really had.

His response was mixed. Did it lead to judges giving more contact orders? possibly. But for his entire career that had been the presumption. Though brought about by the vocal campaigning of father’s groups it was, in many ways, the continuation of long-established practice.

Indeed in Piers’ talk he led his audience through the rather "torturous" section constraining and qualifying the presumption. "When a lawyer reads the subsection in detail, nothing is on the face of it, wrong with it", he caveats.

Onwards in the family courts

Piers could scarcely be more enmeshed in the family division. Married to a family law barrister himself, Piers faced his wife-to-be in court a few days before their wedding.

I found myself very curious as to how the family courts might have changed since he was a baby barrister at the family bar.

"More litigants in person", was his starkest, and perhaps most damning, observation.

Just last month, Lord Willy Bach, with whom Piers worked when co-chair of the Association of Lawyers for Children published the final report of the Bach Commission, calling for legal aid in a number of areas of law. Piers only hopes that they are taken up.

"More judges, more court-time, a better-funded family court system", that, is something, we can all only hope for.