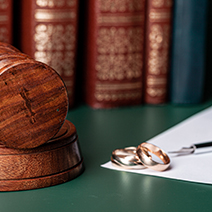 After a legal battle lasting more than five years, Yasmin Prest has won her case against her former husband and Petrodel Resources Ltd (PRL) in the Supreme Court.

The Supreme Court has today agreed to grant Ms Prest financial provision on divorce from the husband’s assets pertaining to PRL. This is despite the opposing position, which maintained that certain properties could not be touched, as they technically belonged, not to the husband, but to various companies. As such companies are deemed to be separate legal personalities, the question before the court was whether the needs of Ms Prest could override this respect for what is known as the ‘corporate veil’.

Though it was held that the ’corporate veil’ could not be pierced in this case, the court demonstrated its commitment to realistic and fair assessment of matrimonial property. The seven justices of the Supreme Court unanimously upheld Lord Sumption’s decision that the properties were held on bare legal title on trust for the husband, Michael Prest. This determines that the beneficial interest of these properties could be transferred to Ms Prest, in order to settle her financial requirements. The court has now ordered seven disputed properties to be transferred to Ms Prest.

In the original case before the High Court, the judge in question, Moylan J, did not determine whether or not Mr Prest was the beneficial owner of the properties in question, as he saw fit to order their transfer to Ms Prest based on section 24 (1) (a) of the Matrimonial Causes Act 1973. This states that the court may order that ’a party to the marriage shall transfer to the other party such property as may be so specified, being property to which the first-mentioned party is entitled, either in possession or reversion’. Moylan J interpreted this as giving him power to transfer the properties to the wife, regardless of whether or not the husband was the beneficial owner, as it could be argued that he was ’entitled’ to them and that he could reasonably obtain them.

However, the Supreme Court determined that this original ruling seemed to stretch the scope of section 24 (1) (a) somewhat. Lord Sumption asserted that, if no justification is generally given for piercing the ’corporate veil’, then this particular clause in the Matrimonial Causes Act 1973 could not be used as such. As a result, Lord Sumption deemed it necessary to determine whether or not Mr Prest was the beneficial owner of the companies; if so, the properties owned by PRL could be transferred to Ms Prest. He determined that this was indeed the case.

Achieving a financial settlement for the wife in this case was considered to be of public interest, especially in relation to the financial provision for the estranged couple’s four children. In his judgment, Lord Sumption described Mr Prest’s behaviour during these proceedings as ’contumelious’, behaviour which has only served to contribute to the length of the case.

Due to the husband’s repeated failure to comply with disclosure obligations, it had been difficult during the course of the case to draw up an accurate estimate of the husband’s assets; they had previously been placed at £37.5 million. The court held that family judges could use their experience and notice of inherent probabilities in deciding what an uncommunicative party is concealing. The judge also determined, crucially, that Mr Prest was the sole beneficial owner and the controller of the companies that comprised Petrodel Resources Ltd.

This case represents a legal watershed because it has been a mammoth clash between the competing interests of family and corporate law. What is more, this judgement in Ms Prest’s favour comes as something of a pleasant surprise for family lawyers, considering that five out of the seven Supreme Court Justices were commercial judges and only two hailed from the family side of the legal profession.

Lord Sumption was keen to stress however, that the act of ‘piercing the corporate veil’ should be an exception and not the rule in matrimonial cases, applied only in circumstances where "a person who owns and controls a company is said in certain circumstances to be identified with it in law by virtue of that ownership and control".

There also needs to be an element of impropriety involved in order to justify ‘piercing the corporate veil’. For example, if corporations in which disputed assets are tied up can be proved to be a "sham" or a mere "façade" for personal interests, the status of the company as a separate entity will be vitiated.

In the Prest case, the husband was not found to have committed any legal wrongdoing. Despite being opaque and mendacious throughout, he had not deliberately evaded his financial responsibilities to his wife. Thus, the ‘corporate veil’ remained intact on this occasion, but Yasmin Prest was able to win her appeal on the basis that her husband was found to be the beneficial owner of the respondent company Petrodel Resources Ltd.