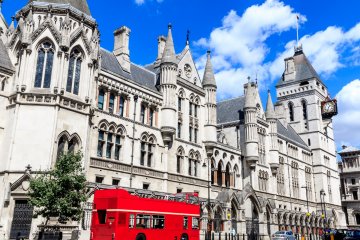 A former girlfriend of Peter Cundill, has failed in her High Court bid to sue the millionaire financier’s legal team after being refused payments from his trust fund.

Tina Chantal Joseph, a Nigerian aristocrat and former model, sued solicitors firm Farrer & Co LLP for negligence after she was cut off from payments worth millions.

Joseph became "close and intimate" to Peter Cundill in the final years of his life before he died of a rare, uncurable disease in 2011.

Aware that his illness was terminal, Mr Cundill sought to make financial provision for Joseph. He bought her an apartment in London and sought to support her through his Bermudan trust fund: a discretionary trust worth £230 million of which only Mr Cundill could benefit during his lifetime.

In 2008, Mr Cundill asked for an unconditional payment of $10 million for Joseph in a request to his trustee, which she co-signed. The trustees refused the request but contemplated making yearly payments for a fixed term. Their eventual alternative proposal totaled payments made in installments worth £5 million. Two payments of £500,000 were made in July 2008 and January 2009, with the second delayed because of ongoing concerns about her interference in care arrangements.

The long term personal care of Mr Cundill following the breakdown of his health had been put in place by the trustees, entrusted with his Lasting Power of Attorney. There was already an "uneasy relationship" between Miss Joseph and the trustees, who apparently viewed her as "greedy and undeserving". After Mr Cundill dismissed his housekeeper apparently on Joseph’s insistence and a document was prepared revoking his Lasting Power of Attorney, the trustees saw this as the "last straw". In February 2009 they moved to stop further payments.

After Mr Cundill died in 2011, Miss Joseph claimed that solicitor Richard Parry whom Mr Cundill had instructed at Farrer & Co in relation to the matter had owed her a duty of care and that the firm was negligent.

Dismissing her claim in the Chancery Division of the High Court in June, His Honour Judge Purle QC found that "there is no scope for implying that he was acting also for the claimant".

The judgment considered the precedent set in Dean v Allin & Watts that the "the court should be slow to assume that the solicitor has assumed a duty of care to the other party". After contemplating the ’threefold test’ established in Smith v Eric S Bush, the judgment concluded that though White v Jones broadly extended the solicitors’ duty of care to beneficiaries, this duty does not apply in relation to inter vivos gifts.

Indeed His Honour Judge Purle QC praised both the trustees and solicitors for their conscientious representation of Mr Cundill:

"Indeed, it is impossible not to read the many reams of paper that have been put before me without feeling a great deal of admiration for the obvious conscientiousness towards the interests of his client, Mr Cundill, that Mr Parry showed and the delicate balance that he sought to achieve between giving effect to his client’s wishes and ensuring that he was not the victim of his own folly."

"Trusts have been vilified as nothing more than tax-avoidance tools, but this case is a great example of why that is a crude and over-simplistic view. Trusts have an important role to play in helping to protect vulnerable beneficiaries. In this case, the judge goes so far as to state that he felt a great deal of admiration for Mr Cundill’s solicitor’s obvious conscientiousness towards his client, and in particular in his seeking to strike a balance between giving effect to Mr Cundill’s wishes whilst ensuring that he was not ‘a victim of his own folly.’ It is a great vindication for Mr Cundill’s solicitor and trustees and serves to show why trusts should remain an important tool in estate-planning."

You can learn more about trusts here.

A trust where the beneficiaries and their entitlements are not fixed, but determined by the trust document and the trustees' discretion.

An arrangement where a trustee holds property on behalf of the beneficiary.

A person charged with looking after property on behalf of the beneficiary.
“Ayesha Vardag - Britain’s top divorce lawyer.”

Oregon parents fight to regain custody of children taken from them because of their low IQ
This site uses cookies. Find out more. Continued use of this site is deemed as consent.   CLOSE ✖