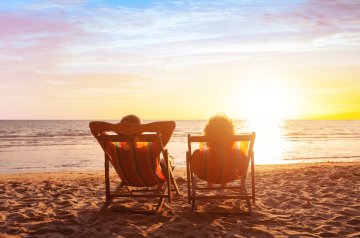 “After many a summer…dies the swan” wrote Tennyson, only he was pondering the end of youth rather than the end of a marriage. It could just as easily refer to a breakup, however, with swans being famously symbolic of monogamy and commitment; it’s also quite appropriate given the marked rise in divorce enquiries the follows the end of summer. Many people know that the post-Christmas and New Year period usually signals a sharp rise in divorce petitions; however, this is not what lawyers see as being peak divorce time: in fact, the beginning of September, as the summer holidays come to an end, sees a surge in family law activity.

Of course, there is much that the end of summer has in common with New Year. Basic post-holiday blues bring a predictable feeling of dissatisfaction, even depression. But while the New Year offers a sense of beginnings and the promise of pastures new, the end of summer brings only the promise of winter: short days and inclement weather, not to mention a hefty wait until the next holiday season.

At Vardags we have seen a 200 percent increase in new client enquiries between August and September. August is generally a quiet month in the legal world, so a rise in activity is to be expected. However, an increase of such a significant margin from one month to the next is more than a question of court scheduling, it’s evidence of a trend.

Proximity to family members for a sustained period of time, particularly in close quarters in a hotel or holiday let is a prime cause. At Christmas, many people report the same problem, especially as members of an extended family may be present; with a summer holiday, the pressures of keeping everyone occupied while finding time to relax paradoxically creates more tension for parents who have travelled abroad in search of sunnier climes. These tensions will only worsen with a relationship that is already on the rocks and, without the daily distractions that enable denial such as work, colleagues and friends, reality can really begin to bite.

For those who stay at home for the summer, the unpredictable British weather contrasted with the expectation of balmy summer days also leaves a bad taste in the mouth, and a feeling of being short-changed, or hard done by. For parents whose relationship is fraying at the edges, a lack of real holiday time over the summer can cause resentments and a sense of missing out or not providing well for the children.

There is another inescapable fact about summer holidays and relationships. Unpalatable though it may seem, holidays – particularly those spent away from home – present the opportunity for other indiscretions. It is not uncommon among family law – where photographs of family holidays frequently come to be used as evidence – to discover things that may have been better kept secret. With the advent of social media, platforms like Instagram and tools like iCloud can lead to many a hiccup, with affairs being inadvertently exposed or, the opposite: lovers or mistresses becoming disillusioned with their trysts after seeing apparently happy snaps from their lover’s family. At Vardags, we have even seen WhatsApp conversations conducted during periods of leisure which expose all sorts of things: adulterous conversations or indeed interactions between husband and wife that can later be woven into a divorce case because they prove or disprove a matter of contention.

Foreign holidays also provide more sinister opportunities for parents who may be considering a divorce: child abduction. Taking a child away to a different jurisdiction can be used as a way of maintaining control over a child’s upbringing while depriving the other parent of contact. According to recent figures from the Foreign & Commonwealth Office (FCO) and the charity Reunite, parental child abduction cases have more than doubled in the decade between 2003-2013 and can involve people from all different cultural backgrounds and walks of life. Nearly as many as two children a day are abducted to a foreign country by parents, so this is by no means rare.

That pre-divorce summer holidays can signal such discontent is a particular shame, because once divorce proceedings are underway, holidays can become battlegrounds, especially when children are involved. We have seen clients get into acrimonious confrontations with ex-spouses over who gets to take the children on holiday, and where, and for how long, not to mention arguments over the fact that the ex’s new partner is getting too friendly with the children and overstepping their bounds.

We’ve even seen a situation where ex-partners ended up holidaying at the same destination, somewhat awkwardly. Then there’s the mother who threatened to cancel her daughter’s passport so that her father couldn’t take her on a summer holiday, and of course the father who let his teenage son run riot with his friends while on holiday only to see his son getting arrested. The boy’s mother only found out about the debacle via Snapchat.

Clearly it’s not enough that summer holidays cause tempers to fray and ruin marriages, it seems they can also make divorces more fraught too. The tug-of-war over children can be as much a culprit as friction and jealousy between spouses, with fractured family time being forced to conform to the stipulations of court ordered child contact and residence arrangements. At least, however, in those situations, everyone knows where they stand. That indeterminate grey area before separation, when a relationship is getting tricky, can cause so much sadness for everyone involved, and it seems, often proves to be the last straw.

The children of divorce
This site uses cookies. Find out more. Continued use of this site is deemed as consent.   CLOSE ✖