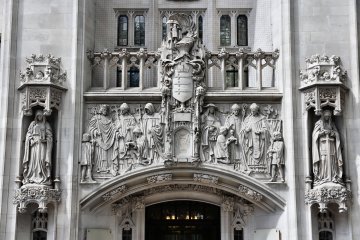 Tini Owens, a wife who hit the headlines after her divorce petition was rejected by the High Court, will argue that she should not have to prove unreasonable behaviour in her continuing fight to secure a divorce.

Ms Owens filed for divorce from her husband of 39 years, multimillionaire mushroom farmer Hugh Owens, in May 2015. Judge Robin Tolson QC refused her petition the following year, ruling that her reasons for seeking a divorce were insufficient, amounting only to what was to be "expected in a marriage".

The wife had cited her husband’s "unpleasant behaviour" in the wake of an extramarital affair Ms Owens engaged in several years ago and alleged that Mr Owens had made "disparaging" remarks about her in front of family and friends.

Judge Tolson dismissed these allegations as “an exercise in scraping the barrel” and Ms Owens took her case to the Court of Appeal, where Sir James Munby upheld the initial decision. Ms Owens subsequently applied to appeal in the Supreme Court.

Under English family law, there is only one ground for divorce—that the marriage has irretrievably broken down. As set out in the Matrimonial Causes Act 1975, this ground can be established on the basis of one of five facts: adultery, desertion, unreasonable behaviour, separation for two years if the petition is uncontested, or separation for five years if the petition is contested. Each of these options demand the attribution of blame, or else require the petitioner to play a significantly long waiting game.

Though adultery featured in Owens v Owens, only the cheated-on spouse can give this as a a reason on their divorce petition and, even then, certain criteria has to be satisfied for a divorce to be granted on this basis. Ms Owens instead cited unreasonable behaviour on the part of her husband but, as established earlier, did not adequately prove this. Mr Owens has expressed his wish to remain married to his wife and defended the divorce. As such, if Ms Owens is unsuccessful in the Supreme Court, she will have no choice but to remain legally married for a period of five years of separation before her divorce is granted.

Contested divorces are exceedingly rare, accounting for less than one per cent of divorce petitions in England and Wales. Cases like Owens v Owens, where an autonomous adult is compelled to remain married against their will, therefore cause quite a stir, throwing the more anachronistic aspects of divorce law into sharp relief.

The real question, whether it is right in 21st century Britain to force couples through the Victorian farce of fault-based petitions, is one only Parliament can answer.

Fault-based divorce has caused significant misery and costs in this case. It does so on a smaller scale for thousands of couples each year.

’It is time that government stepped in and brought about meaningful reform to our outdated divorce laws.

The introduction of no-fault divorce would bring England and Wales in line with many jurisdictions around the world, including Australia, Canada, Mexico, Sweden and certain US states.

In the absence of such reform, Ms Owens’ legal representation will rely on their interpretation of existing statute. Yesterday, 1 King’s Bench Walk published a press release announcing that Mr Philip Marshall QC and his team will argue that "the Courts’ emphasis on trying to find that Respondent’s behaviour is in some way ’unreasonable’ is wrong." They will argue that such an approach is a "linguistic trap":

The statute does not require unreasonable behaviour, but simply behaviour such that the petitioner cannot reasonably be expected to live with the respondent.

A date for the Supreme Court hearing has not yet been fixed.

When the respondent disagrees with the petitioner’s divorce petition.

Domestic abuse allegations in 62 per cent of child contact applications, research finds
This site uses cookies. Find out more. Continued use of this site is deemed as consent.   CLOSE ✖