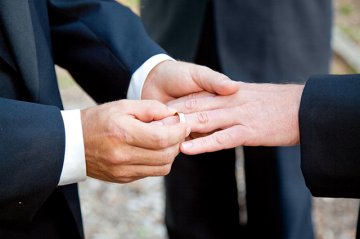 The Office for National Statistics (ONS) has released the numbers of same-sex marriages that have taken place in England and Wales since the implementation of the Marriage (Same Sex Couples) Act 2013. Between 29 March 2014 and 30 June 2015, 7366 weddings took place; of these, 55% were between women and 45% between men.

From March 2014, the number of same-sex couples getting married experienced a steady upward swing, reaching a peak in August 2014. Perhaps not surprisingly, in the month by month breakdown, the summer months were popular for weddings.

In addition to these marriages, there were also 7732 couples who converted their civil partnerships into marriages since 10 December 2014, when this option was introduced. The numbers for conversion were roughly equal for men and women.

Since the introduction of the 2013 Act, the number of civil partnerships has been in sharp decline, with 70% fewer being formed in 2014 when compared with 2013.

When it comes both to marriage and children, it seems that same-sex couples are leading the way in terms of commitment, and rather putting their heterosexual counterparts to shame.

The ONS report can be read in full here.

A third of British working mothers are main family earners
This site uses cookies. Find out more. Continued use of this site is deemed as consent.   CLOSE ✖