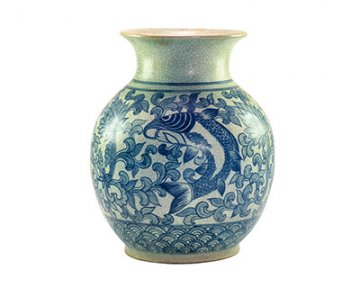 A dramatic legal battle over what has been described as “the world’s most important collection of 17th Century Chinese porcelain”, built up by former Thatcher adviser Sir Michael Butler, has come to its conclusion. On 20 June 2016 Judge Simon Barker QC ruled that two of the deceased’s children may remove their shares of the inheritance.

Sir Butler, who passed away at the age of 86 in 2013, accumulated an unrivalled collection of late-Ming era Chinese ceramics over five decades, during his career as a globe-traversing diplomat. By 1987, he had amassed over 800 pieces and decided to gift the cream of his crop to his four children – 500 pieces named the Butler Family Collection.

However, discussions over the future of the collection beginning in 2010 threw the Butler family into discord. Sir Butler’s youngest child Katharine, now 48, told the Daily Mail that her eldest sibling Caroline, 62, expressed “very different views…over what would happen to the Butler Family Collection in the future”. Whilst Sir Butler was allegedly adamant that the collection should remain intact, Caroline wanted it to be divided into four shares -one for each child.

In a bid to protect the collection from being dismantled, Sir Butler made the ceramics assets of a partnership, which his children could join, on the condition that they agreed not to split up the collection for at least ten years after his death. Caroline, alongside her brother James, refused to comply whilst the two youngest siblings, Charles and Katharine, became partners.

Shortly before his death on Christmas Eve 2013, Sir Butler made the latter two children executors of his estate and bequeathed to them the “lion’s share” of his fortune, which John Brisby QC, acting for Charles and Katharine, claims sparked Caroline’s desire to “get her own back”.

The siblings subsequently became embroiled in a legal dispute, with Caroline and James demanding that their respective shares of the collection be handed over. Caroline refutes Mr Brisby’s claims that she was driven by money and intended to convert the assets into cash, claiming that she simply desires “unfettered ownership of 125 beautiful pieces which……was brought up with”.

Ultimately, the High Court ruled in favour of Caroline and James. Katharine acknowledged that when her father originally gifted the porcelain to his children, they were under no legal stipulations to keep the collection together.

However, with impassioned emphasis on the cultural significance of the collection, Katharine Butler has launched a petition directed at both her sister and the Arts Fund, of which Caroline is trustee, in a last ditch attempt to save the collection. If Katharine is unsuccessful, the Butler children will be permitted to divide up the collection, taking it in turn to choose their respective pieces.

Regardless of the outcome, this case highlights the importance of robust estate planning. Had Sir Butler created a trust as a means of gifting the porcelain to his children, as settlor he could have secured the future of the assets. If you would like more information regarding the creation, administration or termination of trusts take a look at our family law guide.

Property developer loses house to the long-term partner he refused to marry
This site uses cookies. Find out more. Continued use of this site is deemed as consent.   CLOSE ✖