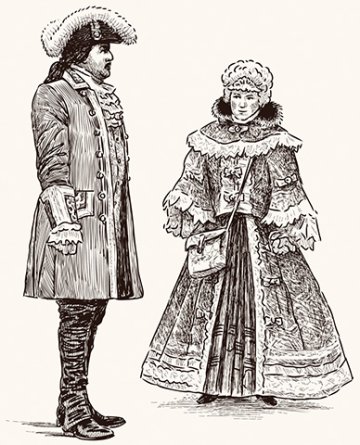 A study by the Open University has put paid to the rose-tinted spectacles view of marriage in the eighteenth century. According to historian Anne Laurence, the idea that, during this period marriages became a thing of romance – befitting the era’s association, culturally, with Romanticism – they were in fact rather mercenary. Money still held sway when it came to selecting a life partner among the social elites.

Or rather, it did for men when it came to selecting a wife. Laurence discovered that from about 1711, marriage announcements in London newspapers routinely included details about the bride’s fortune, to be gobbled up by an apparently moneygrubbing readership. Very often, the quantum of a bride’s fortune would be spelled out in thousands of pounds, while in a slightly more genteel manner, others would simply use Austenian words such as ‘large’, ‘ample’, ‘considerable’ or ‘handsome’. In fact, in 65 percent of almost 400 notices, these sorts of details were often given about a bride’s bounty, while it was rare for much to be revealed about the groom’s. These weddings became publicly transactional, marking the transfer of wealth from a woman’s family to that of her husband.

The findings suggest that such marriages, undertaken in order to facilitate the transfer of wealth from one party to another, became more rather than less important during the nineteenth century. Whereas in the Middle Ages marriages were often a necessary ’safety net’ for survival, generally there was less need for this by the seventeenth century thanks to the Elizabethan Poor Law. Indeed, up to a third of adults were able not to marry at all. However, when it came to the elite end of the market, mercenary marriage became crucial for dynastic purposes. The market was so demanding that in 1742 a book entitled A Master Key to the Rich Ladies Treasury: the Widower and Batchelor’s Directory was published to function as a sort of directory.

This bears out how novelist Jane Austen writes about marriage, if not how she wished it might be: she writes with acidic wit about the mercenary marriage market, and the traps it held for young women. She herself never married, and seems to have held fast to the Romantic view of love for which she is famous. She had an interest early on in life in a young man named Tom Lefroy, but he had little money to speak of and was thus unsuitable. Later in her life she at first accepted a proposal from an unattractive man named Harris Bigg-Wither, who may at least have provided her and her family with some financial security. She eventually decided against it and turned him down: clearly a mercenary marriage was beyond the pale after all for the great Romantic novelist.

Anne Laurence notes how apt the subject still is in today’s marital landscape:

’Western sensibilities react against the idea that marriage might be for reasons other than love of a partner and a desire to spend the rest of one’s life with them. We recognise that no one has to get married to survive. At the same time, the very rich make prenuptial agreements and ever-larger divorce settlements make the news weekly. The preservation of a fortune concentrates the mind on pragmatic considerations.’

Laurence’s paper will be presented at the Economic History Society’s 2015 annual conference.

Modern family values clash for Elton John and Dolce & Gabbana
This site uses cookies. Find out more. Continued use of this site is deemed as consent.   CLOSE ✖