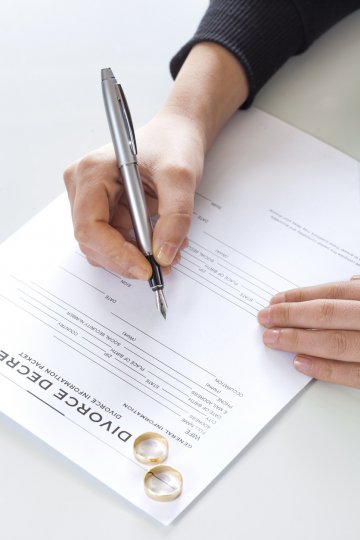 Welshman Nicky Jones, 44, was found guilty of committing the fraud and jailed for eight months. He forged his wife’s signature on divorce papers while she was in hospital, battling stage 3 non-Hodgkin’s lymphoma in her groin, back and stomach.

Diagnosed in 2015, his wife Lucy was initially told she had three months to live. She had to have chemotherapy for 12 - and then 20 - hours a day. Although the couple had split up in 2014, she said "when I had got all that going on, I didn’t care about the divorce, I didn’t think I was going to make it."

She was only made aware that he had fraudulently attempted to divorce her after she was discharged, nine months later. She returned to the family home in Port Talbot, South Wales to collect some belongings. There, amongst other letters addressed to her - ones her husband had denied he had received - she found letters from a court which confirmed her divorce proceedings. Confused, she call the court who told her she had agreed to the divorce. She immediately went to a solicitor who alerted police, while court staff stopped the divorce proceeding any further through the system. Despite the fact that the signature on the documents didn’t look anything like hers, the application was only six weeks away from a decree absolute, where her divorce would have been final.

Lucy realised that while she was receiving treatment in hospital, Nicky had applied for the divorce without her consent. She was shocked. Although they been estranged now for two years, they had known each other for a long time. They had been married for 18 years before their separation; they got married in the idyllic setting of a Dominican Republic beach three years after they met in a nightclub when Lucy was only 18 years old. She knew a divorce was on the cards as he had previously tried to get her to sign paperwork. She had refused as she had not yet had time to read through the details - the couple had two homes and some cash savings to divide. Helen Randall, the prosecutor in this case, said "She believes he had forged her signature to try and gain from her financially at a time when she was ill...She found a letter which said "do you intend to apply to the court for it to consider your financial position," which was answered "no". This means, Lucy believes, that he would have got "everything".

Nicky’s lawyer, Andrew Evans denied that he was trying to take advantage of his wife’s illness. He said that part of his motivation was simply to speed up the progress. " If he had simply waited until his wife was well enough, maybe six or eight months after, she herself would have realised the marriage was over. They had been separated for nearly two years and the divorce would have been uncontested."

Despite the fact that he disputes the prosecution’s explanation of his motives, Nicky pleaded guilty to making a false instrument with intent that it be accepted as genuine, contrary to the Forgery and Counterfeiting Act 1981. Evans said that his client knew he had been "foolish in the extreme" and offered the excuse that he had been dealing with family bereavements at the time.

Judge Peter Heywood described the offence as closer to a perversion of the course of justice than a forgery but in any case certainly "a fraud upon [his] partner and upon the court". He sentenced Nicky to 8 months imprisonment, something he said was necessary to fulfil his public duty - the offence is a serious one that did and could have resulted in serious consequences.

Nicky will only serve half his sentence in custody. Due to a restraining order he was also given, he will be barred from contacting Lucy for at least two years. Lucy, who still has to manage her illness with painkillers, said "It is nice to be able to move on now. At least I have managed to get through it...I asked the police, what would have happened to the case if I’d died, and they said it would die with me. I knew I would keep going. I think to myself, the person I married, I didn’t really know."

Lucy and Nicky Jones are now divorced - they got a house each and she kept her savings and pension.

Mary J Blige settles divorce out of court
This site uses cookies. Find out more. Continued use of this site is deemed as consent.   CLOSE ✖