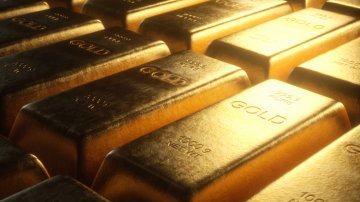 n unnamed Frenchman quite literally struck gold when he inherited a house in Normandy from a deceased relative. After the anonymous heir began moving around furniture in his new abode, he discovered a staggering 100 kilograms of gold, in the form of coins and ingots, concealed throughout the property.

Local auctioneer Nicolas Fierfort told the AFP that he had been called to the property, situated in in the North Normandy comune of Evreux, in order to value some of the deceased’s belongings, but failed to notice the cache on his first visit.

"“It was extremely well hidden – under furniture, under piles of linen, in the bathroom. Basically, it was stashed everywhere!"

The discovery was made when the owner found a tinplate box containing gold coins underneath a piece of furniture. Similar treasures were unearthed from dozens of other spots around the house, including inside a box intended to house a bottle of whisky. In total, 5000 gold coins, two 12-kilo gold bars and 37 ingots were uncovered. After certificates found in the deceased’s estate confirmed the gold’s authenticity, the lucky owner sold off his new-found treasure in lots for a total of €3.5 million.

Under French law, the rate of inheritance tax depends on the nature of the relationship between the deceased and the beneficiary. Assets passed between parents and children, or between siblings on death are taxed the least, but the rate increases incrementally when it comes more distant relatives, with beneficiaries who are not related to the testator subject to the highest inheritance tax band.

It is unclear how the Frenchman in this story is related to the deceased. However, as the gold alone was worth $3.5million, it is subject to the highest rate of tax in each tax band, meaning that the beneficiary will be liable for at least 45% inheritance tax. He may also be obliged to pay three years in wealth tax back-payments if it transpires that the deceased failed to declare his assets.

Guns N' Roses guitarist Slash claims he was never married during divorce dispute
This site uses cookies. Find out more. Continued use of this site is deemed as consent.   CLOSE ✖