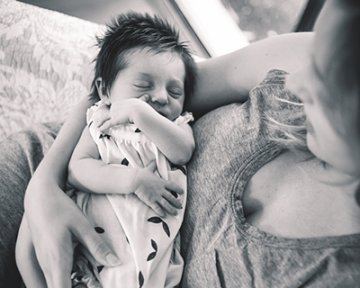 Actress Lucy Liu had her son through gestational surrogacy, where an embryo made from the intended parents’ ova and sperm through in vitro fertilization is implanted in a surrogate.

“It just seemed like the right option for me because I was working and I didn’t know when I was going to be able to stop,” the Elementary star said of her decision to pursue gestational surrogacy.

“I cried when he came out,” Liu told People while supporting Tylenol’s #HowWeFamily campaign.

“I think ‘How We Family’ is about how we as a modern family are connecting now,” she said. “Whether it’s your gay parents… or you have a child that’s transgender, it’s more about how you love.

“I think that’s a really wonderful way to support non-traditional families and make what we are doing now what is tradition,” Liu affirmed.

“I decided that was probably the best solution for me, and it turned out to be great.”

Gestational surrogacy is a relatively rare fertility option. Dr. Tomer Singer, a reproductive endocrinologist at Lenox Hill Hospital, estimates that about 5 percent of the couples he sees use a gestational carrier, reported Live Science.

Gestational surrogacy gives women who have a missing or damaged uterus the chance to be biologically related to their child. Women with health problems that would make pregnancy dangerous, who have experienced recurrent in vitro fertilization failure or—in Liu’s case—who have a demanding career may also choose this surrogacy option.

In the UK, surrogacy is not illegal per se, but surrogacy agreements are not legally enforceable, meaning it is imperative that all parties involved in the surrogacy trust one another completely. One might assume that, in absence of a legally binding surrogacy agreement, the legal parents of a child born via surrogate would be the biological ones. However, this is not the case. As the Alternative Family Law website states, “In all cases the surrogate is the legal mother as the woman who gives birth to the child…irrespective of who the genetic mother or the social mother of the child is”.

Of course, Liu is not under UK jurisdiction, and USA surrogacy laws vary state by state. California law, for instance, upholds surrogacy agreements and allows surrogates to be paid, unlike the UK.

Whilst commercial surrogacy can raise a host of potentially valid ethical concerns, when properly regulated, it allows “non-traditional” prospective parents like Liu a safe and secure means of starting a family.

Meet the couple who Skyped in to their own wedding
This site uses cookies. Find out more. Continued use of this site is deemed as consent.   CLOSE ✖