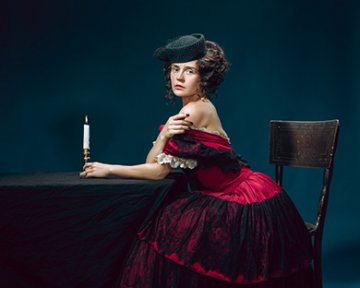 Divorce has been a useful motif for countless authors, allowing them to examine not only the intricacies of difficult relationships, but also the social and legal ramifications. Nineteenth century authors in particular used divorce to highlight the plight of women who were trapped by social conventions which repudiated divorce and legal strictures which prejudiced them.

Recasting these divorces in a modern light is more than just a parlour game – it’s a useful tool to explore modern legal issues, and additionally demonstrates how far divorce law has liberalised.

Published in 1878, the novel tells of Princess Anna Arkadievna Karenina, wife of the much older Count Karenin, a senior statesman in the Russian government. Neglected by her husband, Anna embarks on an affair with dashing cavalry officer Vronsky, ultimately bearing him a child.

Karenin refuses to divorce Anna, with Russian law at the time allowing only a ‘wronged’ party to initiate proceedings. Anna is trapped; she initially elopes to Europe with Vronsky but is, naturally, unable to marry him. Returning to Moscow she finds herself rejected by fashionable society, and her husband again refuses her pleas for a divorce. Fearing that Vronsky will instead marry a wealthy and connected woman, Anna rows with him and falls into depression. Feeling jilted by Vronsky and alienated from both her social circle and her family, Anna ends her own life.

As discussed, Anna’s options on divorce were limited by the patriarchal and religiously-inspired laws of Tsarist Russia. For a modern wife of her standing, things would be very different.

It is no longer the case that only the ‘innocent’ party can petition for divorce. Even in England, where no-fault divorce is not yet allowed, either party can seek the dissolution of the marriage, usually on the basis of an anodyne ‘unreasonable behaviour’ petition. Anna would no longer be trapped by Karenin’s refusal to petition. In a case such as this, however, there is likely to be a significant fight over jurisdiction.

Though the Russian court system attempts to divide a couple’s marital assets between them, it is not empowered to look at assets held in trust or to look at corporate holdings and the court is extremely limited in its ability to award spousal maintenance. The courts in Russia also have a reputation for corruption and bending to the will of well-connected, wealthy men like Karenin. In fleeing westward with Vronsky, it’s likely that Anna (like many modern émigrés) would look to London.

Were Anna able to establish jurisdiction in England, she would likely receive a much higher award. The English courts view marriage as a partnership and will share the assets accrued during it roughly equally. Should such a sharing be insufficient to meet a party’s needs, for example giving Anna the trappings of a wealthy St Petersburg aristocrat, the court can also transfer assets that have been inherited or earned before the marriage took place.

Karenin was a wealthy man. He was highly placed in society with a high earning job and significant family wealth from his place in the Russian aristocracy. Comparing his position with the rich new Russians of today, it is likely that a 21st century Karenin would have been worth tens of millions of pounds.

Knowing the difference between what the courts in Russia and England might award, the two parties would be likely to contest jurisdiction. With no statute to define where the case should proceed, the courts in both countries may entertain proceedings, with London refusing jurisdiction only if it viewed itself as a forum non conveniens, or an inappropriate forum.

If Anna successfully secured the jurisdiction of the London courts, she would be likely to receive a significant sum. Though their marriage was relatively short, and given his age and inheritance most of the wealth was non-matrimonial property, she would still expect to receive a needs based award made with reference to the standard of living during the marriage. Given her lavish enjoyment of the pleasures of St Petersburg, this is likely to be a sizeable sum, taking into account both her housing needs and her income requirements.

Even if Karenin were to successfully divorce Anna through the Russian courts, she may still have an option in England. Part III of the Matrimonial and Family Proceedings Act 1984 permits a person to apply to the English courts for financial relief where there spouse has divorced them abroad and the financial provision is inadequate. The size of the award made would depend on a number of factors, including the links to England the provision made in Russia, though Anna could again expect a sizeable amount to secure her needs. Vardags recently won a significant victory for a Russian émigré wife in Part III proceedings in Z v Z & Ors EWHC 1720 (Fam).

A further concern to Anna was the choice between eloping with Vronsky and having access to her children. Prior to the 20th century, children born in wedlock were the responsibility of the husband – even if, like Anna’s second child, he was not the father. This allowed Karenin to control absolutely Anna’s access to her two children, making it even harder for her to flee the marriage.

Modernity has, thankfully, significantly liberated the position of children in divorce. The decision of where a child should live, and how they should spend time with the non-resident parent, will be determined by the welfare of the child, not the desires of the parents. The court will work with the parties and CAFCASS to find child arrangements which facilitate quality time with both parents according to the child’s needs. Equally, Karenin would have not automatic rights in relation to Vronsky’s child simply because his wife was the mother.

Where, like in Anna’s case, there is likely to be a dispute over the country in which a child is to live, this would also be decided according to the child’s best interests. Permanently removing a child from the country without the permission of the other parent (or the courts) is a serious criminal offence, and the Hague Convention facilitates international co-operation in returning children across international boundaries.

Conditions have changed dramatically since Anna fell for Vronsky. Modern divorce law, especially in England, recognises not only that marriage is a partnership but also that the circumstances of the breakdown of a marriage are complex. The black-and-white divisions of guilty and wronged party have disappeared (though no-fault divorce has yet to be introduced), and legal proceedings are about more than punishing an adulterer’s wrong-doings.

Rather than shackling – socially, legally or financially – a woman to a cold and distant husband, modern divorce law offers a chance for independence and a new life. For women like Anna, divorce is now possible without sacrificing their position in society, their financial security or their access to their children.

Even the present differences between jurisdictions, however, demonstrate that not everywhere has followed England’s liberalising lead. In many countries, such as Russia, the court’s powers to provide financial independence for divorcing spouses are curtailed – often making the decision to leave a spouse financially disastrous.

Ayesha Vardag on the possibility of William and Kate signing a prenup
This site uses cookies. Find out more. Continued use of this site is deemed as consent.   CLOSE ✖