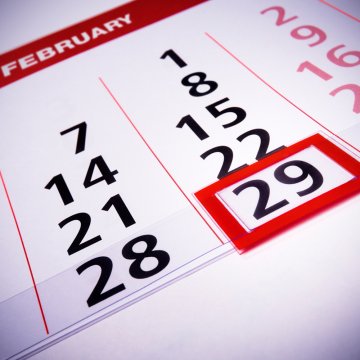 Leap day is traditionally a time when women can buck convention and get down on one knee instead of waiting for their boyfriend to—or so we learned from the movie Leap Year. Irish folklore is considerably less sure about the custom.

As the legend goes, St. Brigid of Kildare, an Irish nun from the 5th century, begged St. Patrick to allow women to propose if their suitors were too shy. St. Patrick was hesitant, but finally allowed women to propose on leap day. St Brigid celebrated by immediately popping the question to St. Paddy, which he politely but firmly refused. It’s a wonder that the trend caught on in the first place.

Inspiring or not, the story is hardly airtight. According to the Huffington Post, St. Brigid may only have been 9 or 10 when St Patrick died.

Anna Bale, research editor and senior technician at the National Folklore Collection at University College Dublin, told The Irish Times, “There is very little mentioned about leap year in conjunction with marriage proposals in our index. In the Handbook of Irish Folklore, the only reference to a leap year is that it is believed to be an unlucky time for changing residence.”

Wherever the custom came from, the real question is whether it should be upheld. Some argue that the practice is decidedly feminist: encouraging women to reverse traditional gender roles and take charge of their love lives.

Yet, in an age of increasing gender equality, should women need the permission of a 16 century-old saint in order to propose? It’s time women cast aside leap day proposals in favour of popping the question whenever the time is right, without fearing that they’ll be shamed for seeming to forward or desperate.

While waiting four years for a leap day proposal may be novel, what’s truly special is to enter marriage as equal partners, regardless of who proposed when.

The murky waters of surrogacy
This site uses cookies. Find out more. Continued use of this site is deemed as consent.   CLOSE ✖