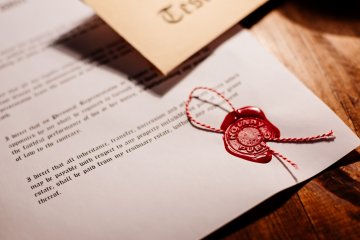 The report follows a public consultation in 2013 in which expert evidence raised concerns about guidance on mental capacity and the formalities necessary to make a will.

The Law Commission argue that the law needs to be modernised, noting that 40 percent of the British population die without having made a will.

The law governing wills in England and Wales is largely a product of the 19th century, with the main statute, the Wills Act, having been passed in 1837.

However given the broad social changes since then, particularly concerning family life and private ownership, many in the legal profession have questioned whether this system is still fit for purpose.

The paper poses a number of questions and proposals for an overhaul of the system including making provision for electronic wills; lowering the age at which you can make a will to 16; updating the law on mental capacity and empowering courts to recognise wills voided due to minor procedural errors.

English and Welsh law places a great deal of emphasis on testamentary freedom, allowing people to dispose of their property on their death as they please.

However the formalities surrounding the making of wills is very strict. To be valid, a will must be in writing, signed by the testator in the presence of two witnesses and signed by those witnesses. Non-compliance renders a will void, regardless how small the error or how certain we can be as to what the testator intended.

The Law Commission recommends introducing a power to dispense with the formalities for a will, to allow courts to recognise wills where the intentions of the deceased testator are clear on a case-by-case basis.

The idea is that this would keep the formalities in place to safeguard against fraud or undue influence but provide a safety net in instances where testators have tried to make a will but it cannot be enforced because of procedural errors.

Testamentary capacity refers to a person’s legal and mental ability to make or alter a valid will. In England and Wales testamentary capacity is set out in the famous 1870 case, Banks v Goodfellow. However the ageing population, growing incidence of dementia and scientific progress has put a strain on the historical understanding of mental capacity as laid out in this case.

The Law Commission propose that it should instead be governed by the capacity test in the Mental Capacity Act 2005. This guidance would take into account a modern understanding of conditions like dementia.

A second key proposal is the creation of a separate doctrine of testamentary undue influence to better protect vulnerable testators. The report’s proposals would also iron out any inconsistencies between doctrine applying to wills and to lifetime gifts.

Alongside well as strengthening protections against exploitation, the Law Commission seek to empower more vulnerable people to make wills. The report recommends reducing the age at which a will can be made to 16 and in order to facilitate more people with diminished capacity making wills, creating a formal support scheme that is simpler and less expensive than seeking a statutory will in the Court of Protection.

Security and infrastructure still pose significant practical challenges to the implementation of electronic wills. However the Law Commission recommends that provision for electronic wills is made by statutory instrument, so that we may well be seeing moves in this direction in the years to come.

Transgender father to appeal for direct contact with ultra-orthodox Jewish children
This site uses cookies. Find out more. Continued use of this site is deemed as consent.   CLOSE ✖