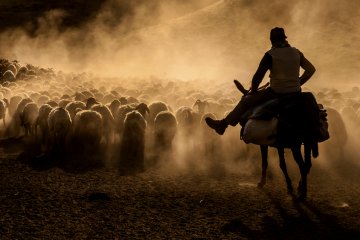 In a recently reported case, a father succeeded in seeking orders to prevent the mother of his child from taking the child out of the jurisdiction for a family reunion in Kurdistan.

The High Court case M (A Child) (Temporary Removal to Kurdistan) was decided last March, with the judgement delivered in private. A version of the judgement has recently been released. In the judgment, Her Honour Judge Robertshaw considers the question of a temporary removal by the mother of a 12 year old girl – M – to Kurdistan for a family reunion with the maternal family.

The parents are both Iranian Kurds who are now based in the United Kingdom, with plans to stay permanently. The father left Iran in 2012 fearing reprisal from the Iranian government after his involvement in an incident with the Kurdish Freedom Fighters, the PDKI. He received asylum in the United Kingdom in 2013.

The father and mother split soon after the mother’s arrival to the UK. A child arrangements order was made in 2015 which saw M living with her mother and visiting her father. The consent order included no restriction on the right of the mother to remove M from the jurisdiction for a period of up to one month without the father’s permission. The planned trip to Kurdistan was scheduled to last less than three weeks.

The father asserts that he first became aware of the mother’s plans to travel to Kurdistan with M in February 2017. He then issued an application for a Prohibited Steps Order to stop her from doing this.

The father’s case rests on the danger to M posed by Kurdistan’s “unstable and dangerous” political climate; a danger which he says is made worse by his involvement with the PDKI.

For the first time during proceedings, he claimed continued political involvement with the PDKI since his arrival in the UK, including a meeting which M attended with him. He claimed images of this meeting may be online. The judge found that he lied or vastly exaggerated his involvement and that he also lied when challenged about why this information had not previously been shared. The judge also found that he tried to conceal from the court his own travel to Kurdistan in 2016 – he would have taken M on this trip had the child herself not refused. There were further lies and omissions in his testimony.

The father also presented as part of his case his belief that the mother planned to further travel to Iran and may not return, despite admitting under cross-examination that there was no evidence for this belief.

Despite the unreliability of the father’s testimony, J Robertshaw found that the trip posed a real, significant and ultimately unacceptable risk to M’s health, wellbeing and even life. The motivation or reliability of parental testimony is not relevant to an objective assessment of the safety of a child. The case affirms the fact that the best interest of the child is always the paramount consideration when a judge exercises their inherent jurisdiction under s1 (1) of the Children Act 1989.

Due to the urgent nature of the application, neither side had the time to acquire expert evidence. The father’s case included documents from the Foreign and Commonwealth Office which advises against all but essential travel to Kurdistan. It stresses the “high threat of terrorism, including kidnapping fatal roadside bombings and attacks on vehicles.”

The principles of the 2013 Court of Appeal case Re R (A child) was applied in comparing the risks and the potential benefits of this trip to the welfare of M. Thus, J Robertshaw considered the extent of the risks posed to M’s physical and psychological welfare and the ability of any party to decrease the likelihood of these risks occurring. The mother planned to avoid crowds and rely on the advice of friends and family. J Robertshaw also considered the question of the magnitude of the consequences should these risks materialize and how possible it would be to access help in Kurdistan or for the child to return to the United Kingdom for help. The mother did not have any insurance in place, nor did she know whether she could or how to contact the British authorities for help if they should need it.

The risks calculated were balanced against the potential benefits of the trip for M.

Special attention was paid to the child’s Art 8 rights under the ECHR – the right to family life. M has not seen her extended maternal family in three years, but previously to this, she had spent her entire life in Iran where they enjoyed a close relationship. The family reunion would strengthen familial and cultural ties and it is accepted that M wanted to go on the trip. However, the safety measures that the mother had or could possibly put in place could not reduce the risks involved to an unacceptable level. On a balance, the risks to M’s welfare outweighed the benefits she could gain. The best interests of the child must be the paramount consideration.

Same-sex couples suing US government for denying citizenship to their children
This site uses cookies. Find out more. Continued use of this site is deemed as consent.   CLOSE ✖