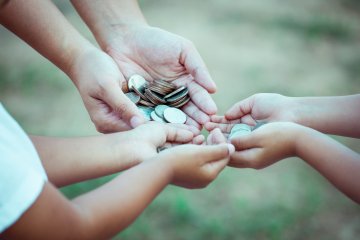 Global maintenance orders are a useful tool to enable the courts to order periodical payments to cover both spousal and child maintenance until a full assessment is made by the Child Maintenance Service. However, few cases have actually considered how such orders should work in practice and there are concerns that they contravene the Child Support Act 1991.

AB v CD concerned an appeal following a four day hearing in October 2016 which saw the net capital assets divided 61% to 39% in the wife’s favour and global maintenance of £39,000 per year ordered to be paid by way of periodical payments “for the benefit of and the children of the family”.

The husband’s appeal was heard in the High Court of Justice before Mrs Justice Roberts in December 2017 and three issues were considered.

First ground of appeal – did the judge have jurisdiction to make the global maintenance order?

Following the introduction of the Child Support Act 1991, the Secretary of State for Work and Pensions is now responsible for “the assessment and collection of child support payments”. Only in certain circumstances, identified as exceptions to the 1991 Act, will the courts be able to make child maintenance orders. Judge Everall QC had accepted in the previous hearing that he had “no jurisdiction to make an order in respect of periodical payments which were directly for the benefit of the children” but concluded that it was “appropriate to make a global order for spousal maintenance to include an element referable to child maintenance”.

The husband argued that the judge had effectively made an order for child maintenance by ordering periodical payments “for the benefit of and the children of the family”. He stated that the judge did not have jurisdiction to make such an order in respect of at least two of the children, the other child potentially falling into one of the exceptions which allows the court to make a maintenance order in relation to that particular child. This ground of appeal was rejected. Mrs Justice Roberts explained that Judge Everall QC appeared to be “following the well-known precedent set by District Judge Segal” by incorporating some of the costs of supporting the children into a spousal maintenance order “as part of a global order”. It was also made clear that this order was not purporting to restrict any child support assessments being made in the future. Thorpe J in Dorney-Kingdom v Dorney-Kingdom described it as “convenient” to have an order which will “carry the parent with primary care over that interim pending the Agency’s determination”; it was seen as “merely a holding” until that full assessment could be made. District Judge Segal further clarified the role of such orders in an article published shortly after Dorney-Kingdom and said that a global order should be used as a “short term measure” early in the ancillary relief proceedings where there has been no CSA assessment.

There were, however, concerns in the present case about the order being in force for ten years, unless brought to an end by one of the listed exceptions. Indeed, it was clear that the global order in AB v CD would not expire “automatically once the CMS had made an assessment”. However, Roberts J held that the order considered by Thorpe LJ was “similar” to the one in the current case and, although he had qualified the legitimacy as being “just within bounds”, he clearly confirmed “the status of such orders as legitimate”. Roberts J said that the judge had adopted an “established approach” used by the court for more than 20 years.

Second ground of appeal – were the periodical payments fair?

The husband argued that the periodical payments could not be said to be fair, given that the net effect of the order created a position whereby the wife had “the greater share of the husband’s net disposable monthly income”. Once rent, school fees and the global maintenance order had been met, the husband’s net disposable income would be £3,300 a month. The wife’s position, combining benefits received with maintenance from the husband, would be £4,700 a month. Upon appeal, he sought to discharge the current order and replace it with an order for spousal support for £1,000 a month.

Roberts J considered the decision made by Judge Everall QC and described him as a “very experienced judge exercising a broad discretion”. She was also satisfied that the judge had considered a “wealth of written evidence” and was therefore fully aware of “every relevant aspect” of the financial situation. Roberts J agreed with the lower court that the wife’s employment position was weaker than the husband’s. One of the children requires special care because of a medical condition and the husband had “underestimated” how difficult it would be for the wife to work whilst caring for the three children. It was also questionable just how realistic it is to expect the wife to find work on a term time only basis in the timescale suggested by the husband. The husband, on the other hand, was “likely to retain his present ‘lock step’ position” and it was not unlikely that his earnings would increase significantly. In addition, the school fees being paid for by the husband would eventually be eliminated altogether because the children were transferring from private to state education. It was calculated that, by July 2019, the husband’s disposable income would increase to approximately £4,200 per month and, by July 2022, would be approximately £5,340 per month and therefore higher than the wife’s. Roberts J therefore rejected this ground of appeal.

Third ground of appeal – was the departure from equality fair?

Judge Everall QC departed from equality when he split the available capital in such a way that gave the wife £1,115,925 and the husband £703,157. The husband was concerned that the judge’s decision left him with a “reduced share from which to meet his own future housing needs”.

Roberts J highlighted the significance of the timing of the appeal. She explained that the wife had “reorganised her domestic and family living arrangements” as a result of her reliance on the decisions made by Judge Everall QC over 12 months prior; she had invested her share of the pot in a home and made various repairs and improvements to that property. Roberts J described the “small uplift of capital” as “wholly reasonable” and explained that it is “well within the band of outcomes which the judge could have settled upon” through the exercise of discretion afforded under section 25 of the Matrimonial Causes Act 1973. It was said to be a “value judgment” and therefore the court should only interfere if the decision can be shown to be ‘wrong’. Roberts J concluded that the decision of Judge Everall QC was “unimpeachable”.

Roberts J dismissed the husband’s appeal and consequently the original order made by Judge Everall QC remained in “full force”. By doing so, she confirmed the opinion of Thorpe LJ in Dorney-Kingdom v Dorney-Kingdom that global maintenance orders are within the “bounds” of legitimacy and do not contravene the Child Support Act 1991. Global maintenance orders have been used for many years and were included in the standard draft precedent forms “omnibus” created by Mr Justice Mostyn. There is no doubt that such orders are a tool at the courts’ disposal, but it remains unclear just where the exact boundaries would lie if the order being considered is quite different to those discussed in Dorney-Kingdom and in AB v CD.

You can read the judgement in full here.

A government body set up to calculate and manage child maintenance claims.

A regular payment made from one party to another. Can be in relation to child or spousal maintenance. Also known as: maintenance payments

Assyrian tablet reveals ancient marriage contract with surrogacy clause
This site uses cookies. Find out more. Continued use of this site is deemed as consent.   CLOSE ✖