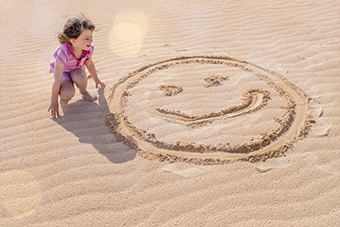 A judgment handed down by Mr Justice Peter Jackson in relation to public law children proceedings is the first of its kind to include an emoji.

The case was between Lancashire County Council and two fathers, Mr A and Mr B. The case is quite complicated and sets out why the children involved are to only have very limited contact with their father.

Mr B was described by Mr Justice Jackson as a “loudmouth” and a “bigot” who saw himself as a victim of the police and social services. He was also due to stand trial for trying to buy guns and ammunition at the time of this court hearing. It is understood he has since been convicted.

A lot of the judgment revolves around a “holiday” that Mr A tried to take the mother and then children on. They children were told they would be going to Euro Disney in Paris. However, that was not the case. Mr A wanted to take the family to a Muslim country. Mr Justice Jackson recalls what happened next, with use of emoji:

“The mother left a message in the caravan for the father’s sister, who I will call the aunt. It told her how to look after the family’s pets. The message said that the family would be back on 3 August. It has a ☺ beside the date. After the family left, the police searched the caravan. They found the message and say that the ☺ is winking, meaning that the mother knew they wouldn’t be coming back. I don’t agree that the ☺ is winking. It is just a ☺. The police are wrong about that, and anyhow they didn’t find anything else when they searched the caravan."

The family travelled to Morocco and tried to enter Turkey. They were sent back to Morocco and then to London. On arrival in London the parents were arrested and the children placed in foster care. The judge states that, “It is lucky that Mr A was arrested so that he was not able to go on with his plans to take the children out of England. That is why it is not safe for him to be in the children’s lives”. He further described Mr A “as a man who cannot be trusted” and that:

“…He might have kept the children out of England last summer and there is a real possibility that he will try to smuggle them out of England in the future if he has the chance. If it suits him, he would take them to a Muslim country and maybe even to Syria. It matters more to him that they should grow up in a Muslim country than in their own country with their mother and Mr B and their grandparents. If he got his way, it would be a disaster”.

The judge considered that the mother had not been a good parent either, “I’m afraid that in that way the mother has not been a good parent. She has been weak and foolish. She has allowed her feelings for Mr A to blind her to what he is really like. Even now, she is struggling to see what everyone else can see. She feels sorry for him and makes excuses for him. That is what Mr A wants her to feel. He has got inside her head and it will take time for her to recover”.

Mr Justice Jackson’s judgement was written to be read and understood not just by the parents but also the older children involved. Legal experts have hailed the judgment an exemplary instance of plain English. The full judgment can be found here.

US fertility doctor accused of impregnating women with his own sperm
This site uses cookies. Find out more. Continued use of this site is deemed as consent.   CLOSE ✖