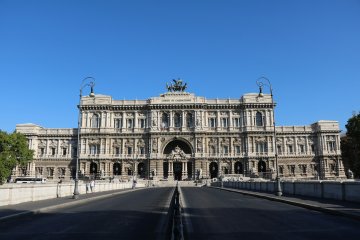 The Supreme Court of Cassation in Rome has ruled that divorcees do not have the right to automatic indefinite maintenance payments. The judges concluded the proceedings between Vittoria Grilli and Lisa Lowenstein with a call to modernise divorce and not see it as a “set-up for life”.

The Telegraph reports that Italy’s economy and finances minister 2012-2013, Vittoria Grilli, and American businesswoman Lisa Lowenstein divorced acrimoniously in 2013. Grilli, 58, was ordered to pay his ex-wife the monthly sum of €2 million to maintain her lifestyle but that was not the end to legal proceedings as Lowenstein returned to court to make Grilli pay her debts. The Milan Court of Appeal rejected her claim for maintenance payments for life on the grounds that her income tax returns were incomplete and Grilli’s income had since reduced. Undeterred, Lowenstein took the matter to the Supreme Court in 2014.

In a landmark ruling, the Supreme Court judges decided that divorcees who have independent means or the capacity to work should not expect to receive maintenance payments indefinitely. They stated that divorced parties are not all entitled to maintain the same “tenor of life” as when married and, if possible, they need to learn to be self-sufficient:

“If it is determined that (a former spouse) is economically independent or effectively is capable of being so, the right (to maintenance) must not be recognised.”

The judges, calling for divorce law to reflect modern relationships, also added that up-keeping payments indefinitely can be “an obstacle to starting a new family”.

Now that the Italian family law system has rejected the idea that divorced spouses are guaranteed their previous standard of living, it is likely that many Italian divorcees will want to challenge their divorce settlements. Eyes are now on Silvio Berlusconi to see if he will push back on his order to pay his second wife, Veronica Lario, €1.4 million a month after their split in 2009.

Now that Italy has made this leap, the interest in reforming the reasoning behind divorce settlements may gain traction in neighbouring justice systems. Only a few months ago, the UK media latched onto the divorce case Mills v Mills where an ex-husband was calling to put an end to indefinite maintenance payments in English law.

Divorce was not legalised in Italy until 1970, over 100 years later than England (although this did not make divorce accessible to everyone). At the time, the majority of women did not work and depended financially on their husbands but now there is more of an expectation for women to be financially independent.

However, the Italian family courts will have to be incredibly careful not to discriminate against the financially weaker party and unfairly disadvantage those without the means to gain financial independence. In the UK, maintenance payments can be set for a limited period of time or until one party dies, marries or enters into a civil partnership. The courts calculate maintenance payments based on the financially weaker party’s income needs and earning capacity, considering a range of factors such as their age, health, caring commitments and the length and living standard of their marriage. The Italian courts may no longer guarantee lifelong maintenance payments, but they must guarantee that those who lost their earning capacity because of their commitment to marriage are provided for.

Mostyn criticises system which lets millionaire pay £7 a week in child support
This site uses cookies. Find out more. Continued use of this site is deemed as consent.   CLOSE ✖