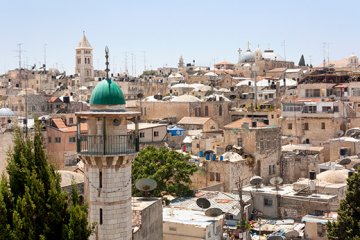 An Israeli rabbinical court has taken punitive measures against an American citizen, who is alleged to be responsible for his son’s refusal to grant his wife a divorce. Mr Jacob Hoffman, who runs a New York real estate company, has been forced to remain in an apartment in Jerusalem for over a year, after the court confiscated his passport and barred him from returning to his home in the US.

The court claims that Mr Hoffman’s son, Chaim, ignored his estranged wife’s request for a divorce and has refused to comply with two court rulings, one of which demands that he pays alimony. The former couple separated shortly after a 2005 visit to Jerusalem, where the wife suffered a debilitating stroke. Mr Hoffman Jr. subsequently returned to the US, whereas his wife remained in Israel with their two children and became an Israeli citizen.

As all family matters are governed by religious law in Israel, the wife was required to obtain a Jewish divorce, which can only be granted with a husband’s permission. According to the Associated Press, the rabbinical court claims that Mr Hoffman Sr. is "responsible for his son’s intransigence", having provided him with a job and a stipend. Therefore, when the father travelled to Israel to visit family in 2015, he and his wife were summoned to court and told to hand over their passports, having been informed that they would be unable to leave the county.

This ruling is thought to be the first of its kind, with the father’s lawyers contending that their client is being used as "leverage" in order to pressure his son into complying with the court’s demands.

Ruth Halperin-Kaddar, founding director of the Rackman Center for the Advancement of the Status of Women at Israel’s Bar-Ilan University told the AP:

“It’s really shameful that this is the only way to solve the terrible plight of this miserable woman, by incarcerating or confiscating the passport of her father-in-law. There should definitely be an alternative way.”

If the wife was seeking a divorce in the UK, she would be able to obtain a civil divorce without the consent of her husband, albeit after five years’ separation. Where Israeli courts have jurisdiction, though, Jewish wives who want to divorce rely on the rabbinical courts putting pressure on their reluctant spouses. Whilst women also have the power to block divorces in Israel, the social consequences of remaining married whilst separating are arguably less dire for men. If a man has a child with a woman before his divorce is granted, that child and their descendants can still be considered Jewish and are able to get married in Israel. The same, however, does not apply to women.

In 1995, parliament attempted to crack down on the problem of divorce refusal by giving the rabbinical courts the power to suspend drivers licences, seize bank accounts, prevent overseas travel and order prison sentences. However, women’s groups argue that these punitive measures are implemented "in less than 2% of cases". Of course, in the case at hand, such punishments would have no teeth unless Mr Hoffman Jr. were to be extradited to Israel. In 2014, an Israeli man was extradited from the US to Israel over his refusal to grant his wife a divorce, a move described as "the first of its kind", and issuing extradition proceedings over a divorce remains extremely rare.

Whether this latest move to punish relatives who are determined by the courts to be encouraging divorce refusal will set a new legal precedent in Israel remains to be seen.

To learn more about Jewish marriage and divorce, take a look at our family law guide.

The end of talaq in India? Supreme Court could declare practice unconstitutional
This site uses cookies. Find out more. Continued use of this site is deemed as consent.   CLOSE ✖