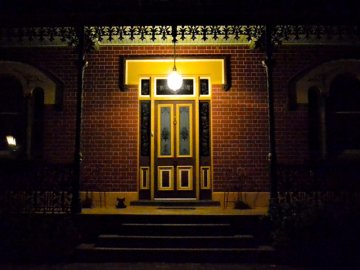 The Sydney Family Court has ruled against an Islamic divorce made on a front porch which awarded the wife only 10 percent of the husband’s $1 million in assets.

The couple, known as Mr Ahmed and Ms Basra in the court documents, married in an Islamic ceremony in Australia in 1997 when Ms Basra was 18. They remarried in Lebanon the same year, a marriage that is recognised by Australian law, and have had three children together.

The Australian reports that Ms Basra, 38, appealed to the Family Court when her husband, 47, tried to leave the marriage with 90 percent of their wealth. Mr Ahmed told the Court that he divorced his wife in 2009 on his porch in front of a sheikh and “a number of other men” as witnesses. As is consistent with Talaq in Sharia law, Mr Ahmed claimed he pronounced “I divorce you” and that both parties signed the Islamic divorce statement. He also told the Court that Ms Basra had been asked whether she wanted to divorce and whether she understood that she was only entitled to $100,000 of her husband’s assets of $1 million.

According to the Daily Mail, Mr Ahmed estimated that he did 100 percent of the bread-winning whilst his wife did 95 percent of the housework and parenting. He maintained that the $100,000 settlement was correct because his assets had been boosted by accident compensation. He also claimed that he had given his wife 2kg in gold but she explained that, in reality, this was simply four gold bangles, a necklace and a ring.

The wife told the Family Court that the account of divorce was false and the ceremony never took place. Instead, she revealed that Mr Ahmed had another wife, recorded in an official document from Beirut. The Court was informed that Ms Basra had previously obtained three Apprehended Violence Orders against Mr Ahmed and had had to take refuge with her children for a total of 15 months. The Counsel for the husband accused Ms Basra of “cynically trying to present her husband as barbaric, misogynist, Arab man” and said she was “attempting to portray herself as this downtrodden, under-the-thumb Islamic woman”. Justice Garry Watts commented that the wife did indeed see herself in such a position and dismissed the husband’s evidence as “contradictory”.

The Court ruled in Ms Basra’s favour and has entitled her to 70 percent of Mr Ahmed’s fortune, suspecting him to have undeclared assets. Judge Watts continued to say that he had “some difficulty in accepting the husband’s evidence as truthful” and ruled that the porch-step Islamic divorce was not recognised under Australian law.

Ken Dodd diddles the taxman by marrying two days before death
This site uses cookies. Find out more. Continued use of this site is deemed as consent.   CLOSE ✖