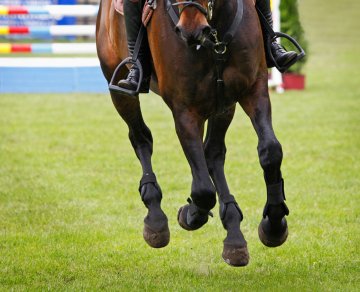 Showjumper Ahmad Mansour rides for Vardags Equestrian from our Dubai base. Having started off 2018 with a leap and a bound, we decided to interview Ahmad in between receiving awards and applause to find out a bit more about his riding career.

Are you from a family of horse lovers?

My elder brother and late father were professional go-kart racers. Their training track was located just beside the stables - we even had to go through the stables to access it. Me and my two sisters were quite young at the time and my mum decided to enrol us for riding - I was six years old. Mum was our biggest supporter. My sisters are now professional riders too, also at international level.

So basically your entire family has the need for speed?

You could say that!

I hear that you are originally from Jordan?

I lived all my life in Jordan. I moved to Dubai in 2012 for university then started working here as an instructor and eventually a rider for Vardags Equestrian.

So when did you start riding for Vardags Equestrian?

It all started last season when I was still a senior instructor at Desert Palm Equestrian Center and I started schooling Ayesha Vardag’s mare Flora and things went on from there. I started developing Flora in the showjumping scene and started competing - we earned a couple of medals over the last season. Then we decided to get some advanced showjumping horses from Holland over the summer of 2017. From there I got offered the job of officially riding for Vardags Equestrian and competing for them which started from the 1st September 2017.

How many horses do you have at the Dubai stables?

At the moment we have four horses. Estoril de Vardag and Ficanka de Vardag are my main showjumping horses. The third one is Atletic de Vardag, Ayesha’s main horse - he’s an eventer but I’m developing his skills in showjumping at the moment. The fourth horse is Fuego de Vardag, an all-rounder as well. He’s Helena’s horse in Dubai.

Can I ask if you have a favourite horse?

I love all four horses, but I have to admit to Estoril de Vardag is my favourite.

I knew it! And why is that?

To tell you the truth it was the first moment we saw her, before we’d bought her. It was love at first sight. Or you could even say love at first stride. We just clicked from the beginning. I really like her type: she’s very hot and compact and she’s full of quality.

What do you look for in a good showjumping horse more generally?

As a showjumper, out of experience, the first thing I look at is the character of the horse because that says a lot about their willingness. But I also look for the movement which includes the temperament of the horse – for instance, are they a bit heavy? I prefer hot-blooded horses. Then after that you have to look at quality by looking at the breeding line.

Since it’s always fantastic weather in Dubai, unlike in the UK, when is the equestrian season?

The season here is a bit longer than in the UK: competitions start from October, all the way down to May, so about six months in total. We rest over the summer, namely because it’s too hot.

It is by far the best showjumping scene in the Middle East because they host a number of the main international shows that happen in the region, which gives us a very good chance to compete in international shows from 1* up to 5* FEI competitions. And these shows qualify mostly for the World Equestrian Games among others.

Do you have an event coming up that you are particularly looking forward to?

We were thinking of competing in Europe this summer but we have paused this idea for this time round and will hopefully do it next summer. So the next main show that we’re looking forward to is the 4* in Al Shira’aa next January.

Mainly on Ficanka and Estoril and hopefully we’ll look at some young horses over the summer for Vardags Equestrian.

How many countries have you competed in so far?

I started competing in the international shows in 2006, in countries including Lebanon, Jordan, Syria, Egypt, Germany and of course UAE, as well as my consistent training in Holland over the summers.

So Holland is close to your heart too?

I have always trained there. My trainer is the one who is helping us purchase these horses for Vardags Equestrian. He brought up a lot of Olympic riders including the Jordanian Olympic rider Ibrahim Bisharat.

What is your favourite part of showjumping?

My favourite part is when you’re in the ring. You have just a minute where you put all of your focus in and all of your hard work - everything goes in that one minute. And when you get the result the satisfaction and everything that you feel afterwards is amazing too.

How do you normally prepare before you go into the ring?

Especially in the show season, because you have competitions almost every weekend, I have a very precise schedule for the horses. I do the minimum I can do just to save their energy and only work on the points I want to work on between the shows. It’s the maintenance and how you schedule your work between shows that really makes the difference.

What do you think has been your proudest moment?

I would say it was when Estoril de Vardag and I won the 135 speed class at the 2* show at Sharjah Equestrian Centre a couple of weeks ago. I think that was the proudest moment so far.

With that motivation, what are your hopes and plans for Vardags Equestrian moving forward?

That would be amazing - for you, for the horses, for Vardags Equestrian…

I truly believe in it and hopefully we’ll get there.

What advice would you give to an aspiring showjumper?

My main advice would be always revise your mistakes, listen and try to gain experience from other riders as well. A lot of people reach a level when they think they’ve learned it all and that’s when development stops. I love listening to people’s advice and opinions about my riding. I try to grab any chance I can to speak to dressage trainers as well as showjumping trainers that come over here to the region. I believe that every experienced person has at least one thing to add, one thing you can gain from.

The last question is slightly bizarre, perhaps you have heard it before - would you rather fight a one horse-sized duck or 100 duck-sized horses?

I had never seen this question before you sent it! I did think about it a lot and I think I’m choosing to fight one horse-sized duck.

That is vindicating for Thea and me, we strongly believe you have made the right decision. Thank you so much for speaking to us, Ahmad. What’s your plan now, are you back into the stables, back into the ring - what happens next?

We just finished our two-week break and we have our first national show this Thursday. We want to keep our ranks up at national shows, because Estoril de Vardag and I are leading at the moment.

Thank you for this lovely interview and hopefully we will meet one day.

Government launches power of attorney refund scheme after 4 years of overcharging
This site uses cookies. Find out more. Continued use of this site is deemed as consent.   CLOSE ✖